Why I killed my lover 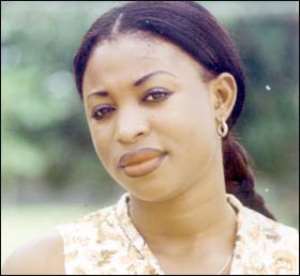 Joy Jennifer Ofili Joy Jennifer Ofili, who stabbed her live-in boyfriend to death over an argument, has said she wished she had died instead of her deceased lover, Christopher Mairo Asiemo.

Jennifer, who went into hiding after stabbing her boyfriend to death, is recuperating at the Police Hospital after a suicide attempt while in police custody.

She was arrested upon a tip-off by a hotel staff where she had ran for cover after a publication in DAILY GUIDE revealed the identity of the lover killer.

Speaking to DAILY GUIDE from her hospital bed last Tuesday, Jennifer said she felt so miserable when media reports published news of the murder. Unable to face public ridicule, she decided to end it all by taking her own life, while at the Tesano Police Station but she did not succeed.

She said she cut herself with a razor blade and started bleeding for well over six hours until a police officer who had brought her food found her and rushed her to the hospital.

Narrating her side of the story to DAILY GUIDE, Jennifer said she and Christopher became lovers after she split from her Ghanaian boyfriend, but the relationship was dogged by constant quarrels and assaults on her by her lover.

According to her, on the fateful day, they argued over money and Chris got furious, threatening to beat her up.

In the ensuing struggle, she had no place to hide so she run into the kitchen where she picked up a knife and threatened to stab him should he beat her again as he usually did.

She said she hoped the threat would deter him from further beating her up, but he rushed on her and started struggling with her over the knife.

In the process, she claimed he got stabbed and died instantly.

“I never wished to kill him. That was not my intention because I only wanted to scare him off.”

“I thought this year was going to be my lucky year since I had a new job. I was planning to relocate,” said she with a sad demeanour, adding that she wished she was the one who had died so he could live, wondering why she did not die in the suicide bid.

Pretty Jennifer, who is now facing charges of murder, said she initially lived with Christopher out of sympathy but this was misconstrued by her Ghanaian lover who was not happy with her conduct.

She said this created misunderstanding between them and they called off the relationship, while she and Chris bonded and became intimate.

Jennifer noted that last year, they went to Nigeria but Chris ostensibly refused to introduce her to his family but she did introduce him to hers.

She said while there, Chris, who was once domiciled in Malaysia until he fell foul of the law and was deported, asked her to give him money to travel to Dubai to start a new life.

Claiming she wanted to get Chris off her back due to the frequent beatings, she allegedly gave him one hundred and eighty thousand naira (N180,000) which he used for the journey.

Jennifer disclosed that while she was still in Nigeria, Chris returned suddenly from Dubai after spending just two months with all sorts of excuses.

He then insisted that they returned to Ghana and urged her to sell her electronic gadgets including a computer, a DVD player and TV set among others so he could use the proceeds to travel to Algeria to which she agreed.

She said when they came back to Ghana, the relationship continued in the same manner, characterized by quarrels and beatings and the last time they fought before the quarrel that led to the unfortunate incident, Chris smashed her head against the wall and she almost fainted.

He also smashed the DVD player and the computer, she claimed.

Jennifer said she had prayed that Chris' plans to travel would go through so she could put the pieces of her life together but the unexpected happened.