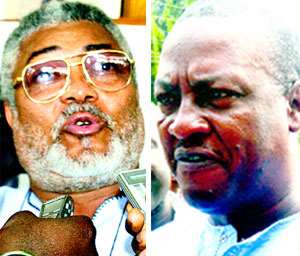 Ex-President Rawlings and the sitting Vice President spoke for the first time on the same platform in Jirapa yesterday, with the pair rowing in separate directions; the former going for the all-action button, blunted by the Vice President, who courageously insisted that the Government would go for restraint and follow the rule of law.

The two were in Jirapa on the last day of the Constituency's bye-election which comes on tomorrow in the Upper West region.

The man who is well known for his aggression, mounted the platform and proceeded to direct President Mills to start the prosecution of former New Patriotic Party (NPP) Ministers before they run away from the country.

According to him, the prosecution must be carried out within the next six months of his administration, and that former district chief executives and Ministers in his (Rawlings) administration must be used to carry out the investigations into the activities of the NPP former Ministers, if the official channel would delay.

The event was expected to shore up supporters at Jirapa, as part of the campaign to win the bye-election which became necessary following the death of Honourable Edward Salia. Rawlings added ominously that the National Democratic Congress (NDC) administration would collapse if the government fail to listen to his advice, because the people who voted for them would soon become fed up.

As if he was waiting to blunt the edge of the ex-President's aggressive tone, which had already set the crowd on edge, Vice President John Mahama told the crowd that they should wait patiently on President Mills because the government was working on bridging the gap between the north and the south within the frame work of the Northern Development agenda.

He strongly asserted that the Government would not rush into taking action outside the rule of law since that is not the way to go.

He said the people should bear with the administration in their appointments into the various government positions, which will be a matter of time.

The first bye-election came about following the death of Hon Edward Salia, and the necessity to have a replacement for his constituents has drawn the battle lines between the NPP's Mr. Justine Bayeleh Dakora, who was the District Chief Executive for the area, and the NDC's Dr. Francis Dakora Bawaana, a London based Psychiatric Doctor and lecturer.

The Democratic Freedom Party has surprisingly fielded a candidate for the two way race, a pupil teacher, Madam Angsiegma Jocelyn.

About 34,258 registered voters are expected to cast their ballot on Tuesday at the 105 polling stations in the area.

The Jirapa District Electoral Officer, Mr. Jackson Annoh said that printed ballot papers and other electoral materials are ready and available for Tuesday's battle, and added that the authenticity of the materials had also been confirmed by the contesting parties, and they have been placed under the custody of the District Police, pending distribution to the various polling centres.

Meanwhile, The Chronicle was hinted that about 200 security personnel have been brought to the Jirapa town to beef up security in the area.

The District Police Commander of Jirapa, ASP Innocent K. Amemo told the paper that there would be reinforcement from the Upper West Regional Police Command and the Lawra district division to strengthen security in the area.

The Chronicle, in its visit to Jirapa on Sunday confirmed that the election would be keenly contested, as there was a display of political party paraphernalia, especially of the NDC and NPP. Other business activities particularly in the Central Business District of the town have also gone up within the last one week, due to the large number of people trooping to the Jirapa town.