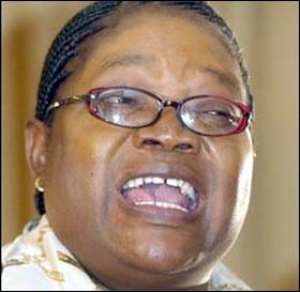 There has been no comment from Mrs Mujuru, who was appointed five years ago by President Robert Mugabe as Zimbabwe's first female vice-president.

She is one of about 200 Zimbabweans the EU has hit with sanctions, accusing them of human rights abuses.

A company with offices in Europe, Firstar, says Mrs Mujuru's daughter, Nyasha del Campo, offered to sell more than three-and-a-half tonnes of gold from the Democratic Republic of Congo.

Ms del Campo declined to comment on the allegations and says she is consulting her lawyers.

Copies of e-mails seen by the BBC suggest the Zimbabwean vice-president was to pay the transport costs of delivering the gold to a refinery in Zurich.

Mrs Mujuru was central to the deal, says Felix Eimer of Firstar.

"The contact is from her to the gold mine. Nyasha was just the person that was co-ordinating the things for third parties," he said.

"The person behind the deal and the person that organised the funding for the deal that was necessary to complete it and to enter the deal was her mother."

Firstar says it withdrew when it realised who she was.

The company says Mrs Mujuru then phoned its chief executive in Europe demanding the decision be reversed.

The BBC has been unable to contact Mrs Mujuru.
She and her husband, Solomon, a former head of the national army, are among the wealthiest and most powerful people in Zimbabwe, with extensive mining interests.

If They Like, They Should Boycott The Voter Registration – J...
45 minutes ago