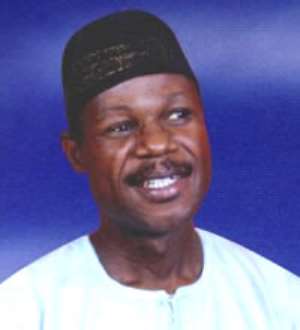 The death is reported in Accra on

(NDC) MP for Jirapa in the Upper West Region and former

Minister of Transport and Communication.
Sources close to the NDC said Mr Salia died shortly after a

in his house at Adjiriganor in Accra.
The sources said the delegation prayed with him and his wife

and three of his children before departing. However, when they

arrived back at the Castle, there was a telephone call that Mr Salia

had passed away.
Vice President John Dramani Mahama has visited the widow.
Mr Salia was born to Bajeluru Salia, a farmer and Habiba

Greater Accra Region. He was married with four children.
Mr Salia attended the University of Ghana, Legon. In 1977, he

furthered his education at I.S.S. in The Hague, Netherlands after

which he attended Carleton and Ottawa University.
He proceeded to Ghana Institute of Management and Public

Administration (GIMPA) from 2005 to 2007.
He had knowledge in administration, planning, analysis and

business.
In 1977, he acquired professional training in project planning

and management and in 1987-88 in public administration (Lester

Come out and declare your commitment to fight against galams...
29 minutes ago