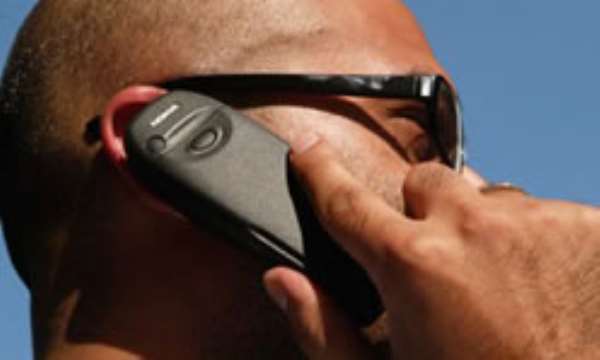 Within seconds, one can pass on vital information, send invitation, conduct business and make an appointment miles and miles away either by speech or text message. This is made possible by what an industry expert describes as a technological marvel-the mobile phone.

It is estimated that about 30 billion messages are exchanged worldwide each year, and in one country a telephone company made 7.5 billion mobile phone calls in a recent year where 75 per cent of the population own mobile phones.

Gone are the days when those seen with mobile phones were considered as rich people. Mobile phone use has become so common and fashionable that those without it can be classified as belonging to antiquity.

Grandparents, boys and girls, pure water sellers, orange and banana sellers, driver's mates and even truck pushers, all have this high-tech device. And very recent sophisticated models have rendered the earlier ones so obsolete and shameful that it requires a flint-like, stem face to be able to expose it in public to receive or make a call.

This trend drives people to make huge savings for the purpose of marching with the mobile phone 'Joneses' to the neglect of other essentials. Next come the call credits. Do you know that in the low-income group, money spent on call credits outweigh that spent on food and footwear?

For some mobile phone users, keeping credit-charged phones, while they themselves go hungry is preferred to taking nutritious meals, while their phones are credit-hungry. Is that not a means of enslavement and impoverishment? Affordability must therefore be taken into consideration when contemplating buying a mobile phone.

Mobile phones and morals
Besides its usefulness in business transactions, information delivery and invitation, the mobile phone has, among the youth, become an easy tool for flirting. Immoral contacts are initiated and strengthened in text messages, since it is easy to write serious things that would be difficult to say face-to- face.

Such messages are always kept secret from parents and even spouses, and quickly deleted. Similar, certain calls received are answered undertone or by isolating oneself, thus creating doubts and suspicions. Among the youth, night calls are the most ideal time for this mobile phone flirting.

Eventually, the device is used in making appointments and fixing venues for the immoral purposes. Should those who call themselves Christians be involved in such practices?

It is the deceptive use of the mobile phone that is opposed to the Biblical requirement that 'we should speak truth to each other,' 'we should safeguard our lips against deception,' and 'a man of deception God hates.'

Mobile phones and air-crafts
Another dangerous potential of mobile phones that underscores the strength of its power is its interference with aircraft electronics.

It has been observed by Britain's Civil Aviation authorities that radiation emitted by mobile phones poses a threat to aircraft in flight. The higher the aircraft ascends the powerful the phone's radiation becomes as it is carried further away from its base station. This intensifies the mobile phone's interference level during the plane's critical times when in flight, thus causing problems because warnings to turn off the devices have been disregarded by passengers.

Tiny though it is, the phone's unseen radiation and signals are capable of causing great harm and should be used wisely and cautiously.

The health hazards
It was not until recently that conclusions have been reached that mobile phones are capable of causing harm to human beings.

How would you feel if after your wife's several miscarriages her doctor told her that her miscarriages were being caused by her mobile phone? Flabbergasted, won't you?

Some of the discoveries about the health hazards are from the unfortunate personal experience of a woman as related below.

Yes, a woman had several miscarriages just when the foetuses were two to three months old. She had been hopping from doctor to doctor who performed laboratory tests in an attempt to fathom the cause of her miscarriages, which could probably lead them to a solution, but to no avail.

One of the latest doctors who evacuated another aborted baby decided to examine the dead baby. The shocking result of his examination revealed that the baby's body kept dying gradually in the womb as it grew until it couldn't survive.

The doctor explained that the death of the baby's cells is radiation-related, which could be blamed on mobile phone. He said because the uterus had been affected by radiation killing majority of the cells of the uterus, her possibilities of giving birth to healthy babies in future would be very slim.

The woman admitted that she had, for the past few years, been keeping her mobile phone in the pocket of her office jacket which is close to the region of her uterus.

One of her earlier doctors advised that nursing mothers must keep mobile phones away from babies to prevent radiation from damaging their brain cells, "and never should babies or toddlers be allowed to play with mobile phones," he added. The doctor explained that because babies and toddlers are fragile and tender, they are more vulnerable to radiation that can easily retard their natural brain faculties.

What about male adults? Are they exempt? Certainly not! Once the uterus of a female adult can be damaged by radiation from mobile phone, the genitals and brains of male adults cannot escape the damage because they are all made up of cells.

We are, therefore, advised to keep our mobile phones away from the regions of our kidneys and genital organs-the lower abdomen-as they are capable of damaging the kidney and also rendering us impotent.

They should not be kept as companions in bed or' close to our bed. Keeping them in our shirt pockets close to our heart is said to be very dangerous. It is a recipe for cancer of 'the heart. They should be kept away from us if they are not being used.

It is more advisable not to keep electronic gadgets such as televisions and even digital alarm clocks in our bedroom while sleeping, as they also emit radiation.

Although we cannot completely avoid all health hazards in this pollution-filled world, we can reduce it relatively to lengthen our days for a few more years.