Obama tells Arabic network US is 'not your enemy' 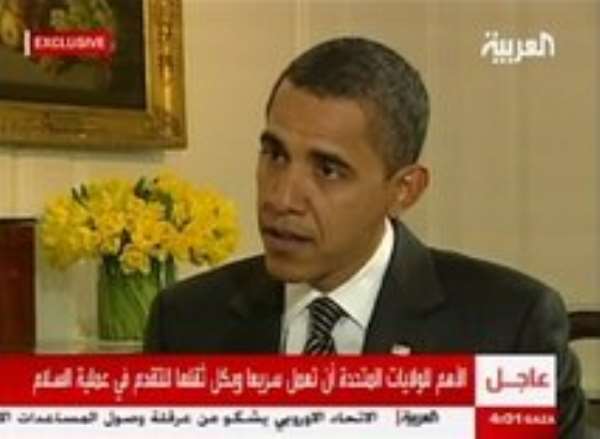 CAIRO, Egypt – President Barack Obama chose an Arabic-language satellite TV network for his first formal television interview as president, delivering a message Tuesday to the Muslim world that "Americans are not your enemy."

The interview taped Monday underscored Obama's commitment to repair relations with the Muslim world that have suffered under the previous administration.

The president expressed an intention to engage the Middle East immediately and his new envoy to the region, former Sen. George J. Mitchell, was expected to arrived in Egypt on Tuesday for a visit that will also take him to Israel, the West Bank, Jordan, Turkey and Saudi Arabia.

"My job to the Muslim world is to communicate that the Americans are not your enemy," Obama told the Dubai-based Al-Arabiya news channel, which is privately owned by a Saudi businessman.

Obama said the U.S. had made mistakes in the past but "that the same respect and partnership that America had with the Muslim world as recently as 20 or 30 years ago, there's no reason why we can't restore that."

During his presidency, former President George W. Bush gave several interviews to Al-Arabiya but the wars he launched in Iraq and Afghanistan prompted a massive backlash against the U.S. in the Muslim world.

Al-Arabiya has scored interviews with top U.S. officials in the past, including Bush and Secretary of State Condoleezza Rice.

The channel is seen by some in Washington as more balanced in its coverage than its Qatar-funded rival Al-Jazeera, which the previous White House administration complained had an anti-American bias.

Obama called for a new partnership with the Muslim world "based on mutual respect and mutual interest." He talked about growing up in Indonesia, the Muslim world's most populous nation, and noted that he has Muslim relatives.

The new president said he felt it was important to "get engaged right away" in the Middle East and had directed Mitchell to talk to "all the major parties involved." His administration would craft an approach after that, he said in the interview.

"What I told him is start by listening, because all too often the United States starts by dictating," Obama told the interviewer.

The president reiterated the U.S. commitment to Israel as an ally and to its right to defend itself. But he suggested that both Israel and the Palestinians have hard choices to make.

"I do believe that the moment is ripe for both sides to realize that the path that they are on is one that is not going to result in prosperity and security for their people," he said, calling for a Palestinian state that is contiguous with internal freedom of movement and can trade with neighboring countries.

On Tuesday, Gaza's fragile truce was threatened when a bomb detonated by Palestinian militants exploded next to an Israeli army patrol along the border with Gaza, killing one soldier and wounding three.

Obama also said that recent statements and messages issued by the al-Qaida terror network suggest they do not know how to deal with his new approach.

"They seem nervous," he told the interviewer. "What that tells me is that their ideas are bankrupt."

In his latest message on Jan. 14, al-Qaida leader Osama bin Laden said Obama had been left with a "heavy inheritance" of Bush's wars.

Shortly after the election, the network's number two, Ayman al-Zawahri used a demeaning racial term for a black American who does the bidding of whites to describe Obama.

The message suggested the terror network was worried Obama could undermine its rallying cry that the U.S. is an enemy oppressor.