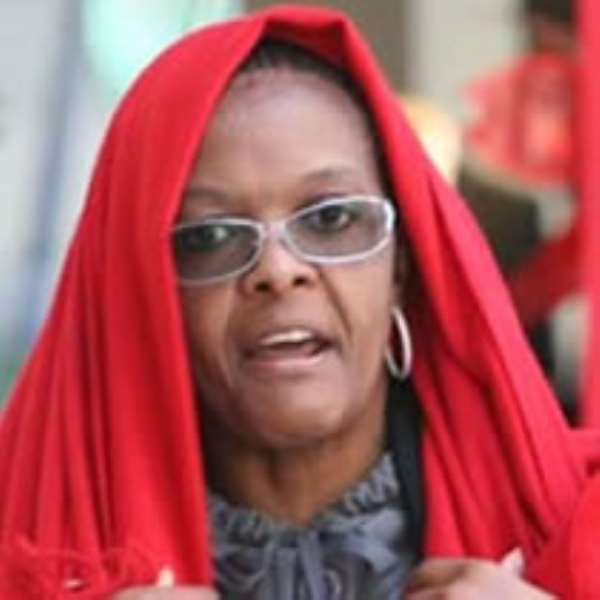 A Sunday Times photographer has been beaten up and punched repeatedly in the face by the wife of President Robert Mugabe.

Grace Mugabe, 43, known as the First Shopper of Zimbabwe, flew into a rage when she was spotted last week leaving the exclusive Shangri-La hotel in Hong Kong. She has been staying there with her entourage at a cost of £2,000 a day while her country endures poverty, hunger and disease.

Holding a Jimmy Choo-style bag estimated to be worth at least £2,000, and hiding behind Cavalli rhine-stone-framed glasses with a red cashmere shawl over her head, she ordered her bodyguard to attack the photographer, Richard Jones.

While the guard tried to wrestle away Jones's camera, she joined in the assault.

“The man held him while she hit him again and again in the face with her fists. She was screaming, completely crazy,” said Werner Zapletal, a tourist from Austria who witnessed the incident.

Jones, 42, suffered nine cuts, abrasions and bruises to the face and head caused by the heavy, diamond-encrusted rings Mugabe was wearing, according to a medical report by Dr Raymond Ng, a general practitioner in Hong Kong.

During the assault more burly bodyguards came running from the hotel but were intercepted by security men from a nearby commercial building.

Mugabe and her female companion fled around a corner seeking to hide their faces, only to run straight into a second photographer, Tim O'Rourke. He snapped a few pictures before she flew at him with her fists flying, pulled his hair and tried to smash his camera. She then hurried back to her five-star refuge.

The Hong Kong police, who were called to the scene, detained the bodyguard. He was allowed to go after questioning. The police took a statement from Jones last night.

Officers at the Tsim Sha Tsui police station will study CCTV footage of the incident, which they are treating as “serious” and “political”. A decision on whether to press charges is pending but Mugabe could claim immunity from prosecution.

Jones, who has worked for The Sunday Times for 15 years, said the guard held on to him, trying to grab his camera, as Mugabe approached.

“Out of the corner of my eye I saw her charging towards me in a rage. As soon as she arrived she started trying to get my camera too. I wouldn't let go. He held me and she just started aiming punches into my face,” he said.

“She was standing there in a mad rage, screaming something at me, and just kept lining up the punches, all into my face. She had some nice jewellery and was aware it would cut me, I'm sure. She looked totally deranged.

“I thought, how can a first lady be doing this? I was in shock more at the situation than the punches.”

Before she embarked on her Far East holiday at the beginning of January, Mugabe withdrew US$92,000 from the central bank in Harare, Zimbabwean sources said.

Accompanied by her children, she stayed first at the Malaysian island resort of Langkawi. She then moved on to Singapore where she was joined by her husband for a few days.

There had been speculation in Zimbabwe that the president would cancel his annual holiday in the face of a growing economic and political crisis. The country is beset by a cholera epidemic that has claimed more than 2,100 lives.

Over the past nine months Zimbabwe has been without a legal government. Talks to implement a power-sharing agreement have collapsed and hostility to his rule has intensified. Morgan Tsvangirai, the opposition leader, returned for talks yesterday after two months in Botswana.

Annual inflation has soared to more than 231m% and a Z$100 trillion banknote was introduced on Friday. Dozens of activists have been detained, accused of plotting to overthrow the regime.

Nevertheless the Mugabes went ahead with their holiday. While the president stayed on in Singapore until January 11 before flying home, his wife flew to Hong Kong on January 9 and installed herself in the £600-a-night Harbour suite on the 18th floor of the Shangri-La.

There she played hostess to the couple's daughter, Bona, who studies in the city, and to a stream of relatives and friends. She rarely went out but other members of the party were ferried around in black limousines costing £60 an hour.

Grace Mugabe is more than 40 years younger than her 84-year-old husband. Formerly his secretary and mistress, she finally married him in 1996 after the death of his wife of 30 years, Sally, a Ghanaian intellectual. They have three children, Bona, Robert and Chatunga.

Grace Mugabe has often been blamed for encouraging her husband's extreme views. Last year she said he would never surrender power.

Since becoming first lady, she has spent a fortune on foreign shopping trips, built a mansion in Harare, dubbed Gracelands, and acquired several formerly white-owned farms. Once, when asked why she spent thousands on expensive Ferragamo shoes while her people starved, she replied: “I have very narrow feet, so I wear only Ferragamo.”

She used to indulge her passion for shopping in the boutiques of Paris, New York and London. But when America and the European Union imposed sanctions on the Mugabes and their cronies they turned to the Far East.

Hours after the fracas on Thursday she left Hong Kong for home, where many call her “Dis Grace” behind her back.