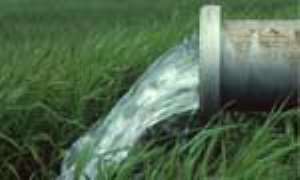 THE GHANA Water Company Limited (GWCL) for the past years has been producing about 43 percent of total demand of water by the people of Tamale Metropolis, due to breakdown of some machines at the water station.

The Northern Regional Chief Manager of GWCL, Samuel Mensah, has therefore bemoaned the perennial water problems faced by residents of the metropolis, and blamed some unscrupulous settlers along the main pipelines for the problem.

Speaking at the inauguration of the Kumbungu Water and Sanitation Committee and signing of facility management plan at Kumbungu on Saturday, Mr. Mensah regretted that over 60 percent of water produced by GWCL remained within the corridors of Dalon and its environs.

Meanwhile, beneficiaries within these areas who were provided with 24-hour water supply for the past year had failed to pay for the services rendered them, bringing a huge loss on the company.

In ensuring mutual understanding between the Kumbungu community and the GWCL for the enhancement of continuous water supply in the area, the company together with the Chief of Kumbungu has put in place a Water and Sanitation Management Structure (WASM) to oversee the utilization and payment of water bills.

The 28-member committee will be responsible for the collection of water bills and maintenance of water facilities in the area.

The Project Manager for the Tamale Water Expansion Project, Mr. Edward Kwabena Agyekum, in an interaction with the press, explained the rationale behind the establishment of the WASM in the area.

According him, the illegal tapping of water  by communities on the main supply lines was a source of worry to his outfit, hence the establishment of WASM as a step to curtail the trend.

Mr. Agyekum said the illegal tapping of water from the old water transmission lines from Dalon to Tamale led to a daily loss of about 60 percent of treated water along the lines.

He indicated that the company could now heave a sigh of relief as the over 200 settler communities along the lines had registered their preparedness to support the project, saying this was the surest way to bring the perpetrators of such acts to book.

Tamale, which is regarded as the third largest city in the country, had the water supply system established in the 1970s with the construction of an intake on the White Volta, about 38 kilometres away from the regional capital.

But due to the inability of the project to adequately supply water to all communities in the area, it was proposed that it should be expanded to enable all residents get access to potable water, as a way of fighting the guinea worm disease which is on the rise in the region.

Therefore, the Ghanaian and Dutch governments mixed a credit facility consisting of a grant of 50 percent, with another 50 percent contribution from the government of Ghana through a concessionary loan from the ING Bank in Netherlands, and awarded the expansion project to Messrs Bi-Water for execution.

The Engineer gave the assurance that the current expansion works would be completed on schedule.