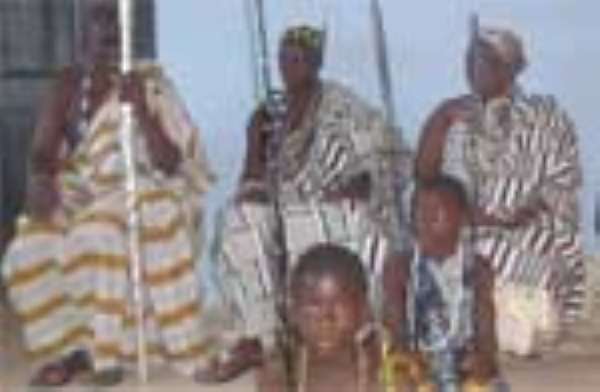 THE GREATER Accra Regional Minister, Sheikh I.C. Quaye, has appealed to all Ghanaians to jealously guard the good image the country has attained internationally as a peace loving nation, by eschewing all forms of violence in the electioneering period.

He said Ghana had chosen the path of democracy which allows interested parties to vie for any position with the best taking the day and this, according to him, should not lead to any frictions.

The Regional Minister made the appeal at the outdooring ceremony of newly-installed Chief and Queen of Matsekope in the Dangme East District of the Greater Accra Region.

Nene Ayiku Adjovu I and Naana Adu Akrofi I were outdoored at a colourful ceremony adorned with pomp and pageantry.

It was an event that pundits described as one of the most peaceful in recent times with the few policemen detailed to the place virtually on holiday.

The eventful occasion, which was threatened that morning by a heavy rain which left the Presby School Park soggy, attracted a stratum of dignitaries who came from far and wide to witness it.

Sheikh Quaye noted that the kingmakers' selection of a Christian Chief and a Moslem Queen was reminiscent of the trust and goodwill the people of Matsekope had for themselves and their community.

He said chieftaincy was an institution which must be cherished and clothed with the necessary awe, considering the indispensable role it plays in nation building; a fact the government had duly recognized by making Chiefs partners of development.

He admonished Chiefs to do away with unnecessary conflicts and litigation; acts he said were inimical to communal development, advising them to give the institution the respect it deserved.

He advised Nene Ayiku and Naana Akrofi to listen to wise counsel and serve the people whose trust they had gained faithfully, preserving the lands for the incoming generation to facilitate the development of the community.

In his turn, the Mayor of Accra, Stanley Nii Adjiri Blankson, entreated the traditional leaders to observe high morals, be transparent and truthful to their subjects to have a peaceful and fruitful reign.

He urged them not to collaborate with greedy elders to sell the community lands, as that would be detrimental to the Matsekope community in the long term.

He congratulated the indigenes for coming together for the installation, an attitude he believed would surely fuel the development of the village.

The Paramount Chief of Ada pledged his unflinching support to the new leaders, encouraging them to consult him with any problem so that they could together hold aloft the banner of chieftaincy in the Ada community.

He disclosed that efforts were underway to set up a committee to look into the numerous chieftaincy disputes bedeviling the Ada community and find lasting solutions to them.

He lauded the royal hierarchy for the good work done in choosing the candidates which had resulted in a peaceful installation.

Nene Ayiku Adjovu I, known in private life as Moses Teye Adjovu, until his installation, was the assembly member for Matsekope/Korluedor Electoral Area in the Dangme East District while the Queen, Naana Adu Akrofi I, known as Catherine Korkor Akrofi in private, was a successful businesswoman with rich experience in trade and commerce.