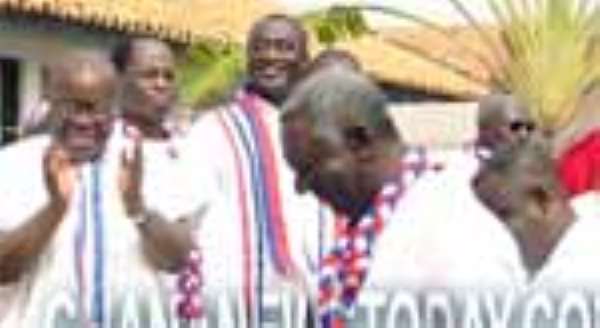 Reports reaching DAILY GUIDE indicate that all is set for the return of former Trade and Industry Minister, John Alan Kwadwo Kyerematen, into the fold of the New Patriotic Party (NPP).

Alan, who resigned from the party last week, was said to have had fruitful meetings with party elders, setting the stage for his return.

According to inside sources the NPP defeated presidential aspirant had told party gurus he was ready to rescind his decision.

What might delay the announcement, DAILY GUIDE gathered, was the absence of the party's national chairman, Peter Mac-Manu, who was on his way to Australia on the day Mr. Kyerematen submitted his letter of resignation.

Mac Manu would be back on Thursday, after which a meeting would be convened to look into some of the concerns raised in Alan's letter to pave way for his return.

Since Alan's 'bombshell' hit the party, efforts had been intensified to bring him back, with the reported setting up of a team by President John Agyekum Kufuor to talk to him.

Former national chairman, B.J. da Rocha and former Speaker of Parliament, Peter Ala Adjetey, including the chairman of the Ashanti Regional Council of Elders of the party, Akentten Appiah-Menka, were said to have had separate talks with the former minister at various locations.

And during the election of a municipal chief executive for the newly created Adenta Municipal Assembly yesterday, Sheikh Ibrahim Cudjoe Quaye, Greater Accra Regional Minister, (a.k.a. 'agbenaaa') confirmed Alan's return, saying the tug-of-war was over.

He told DAILY GUIDE that Alan had rejoined the NPP family, adding that the former Trade Minister would announce his return at the press conference soon.

Mr. Appiah-Menka, whose earlier reaction to the resignation was that of indignation, was said to have held a marathon meeting with the former minister in Kumasi on Friday evening, with a promise that his grievances would be looked into.

Appia-Menka on Monday confirmed on Joy Fm in Accra that he had had progressive meetings with Alan but said he was not ready to go into any details.

Kyerematen, popularly called Alan Cash, was the runner-up in the party's competitive presidential race at the December 22, 2007 Legon congress.

He pledged his support to the first-round winner at the congress, Nana Addo Dankwa Akufo-Addo, and saved the party the agony of a second-round electoral bout.

Nana Addo subsequently made him the chairman of Identifiable Groups in the party's campaign team. He had since chaired a number of committee meetings.

However, just when the party hierarchy thought everything was going on well, Alan threw the bombshell, announcing his resignation from the ruling party.

In a letter addressed to the National Chairman and copied President Kufuor; the flagbearer, Nana Akufo-Addo; and general secretary, Nana Ohene Ntow, he lamented that his supporters in the party were being harassed.

According to him, based upon reports flooding his end from the various constituencies, he had no choice but to opt out of the party.

“It is sad to note that even my recent efforts to embark on a 'thank you' tour of various constituencies during which I took the opportunity to call for peace and sanity in the party has been misconstrued in certain quarters within the party, leading to all kinds of negative propaganda.

“Under the circumstances, Mr. Chairman, I am compelled, regrettably to hereby resign my membership of the party with immediate effect,” he stated in the letter.

However, Alan intimated that he would rejoin the party at the appropriate time if circumstances permitted.

His resignation was greeted with mixed reactions. While some party members contended that his exit would have zero effect on the fortunes of the ruling party, others simply pleaded with him to return.

But in the midst of the heat that greeted the resignation, Alan's nephew, Kuuku Welsing-Jones, was the first victim.

The editor of The New Vision, Alan's newspaper, was sacked following some ethnocentric remarks he made in his desperate attempt to defend his uncle.