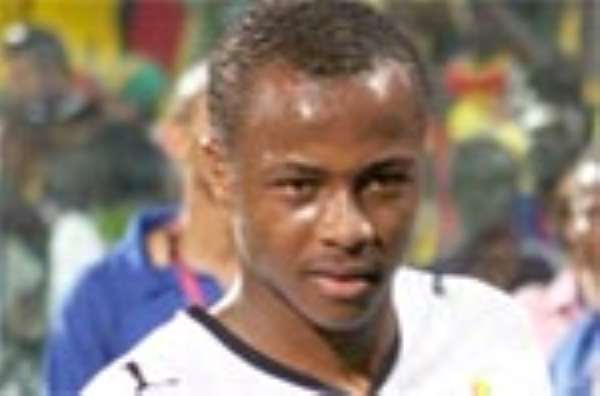 Following the flashes of brilliance he has so far showcased in his young footballing career, coupled with his impressive outings for the Black Stars during the just-ended Africa Cup of Nations, Andre Dede Ayew has been appointed Sports Icon for the only Ghanaian-owned cellular network, Onetouch.

As a result of the appointment, Andre Dede Ayew was last Tuesday unveiled at a short ceremony which took place at the Head office of Onetouch.

In his address, the Chief Operating Officer of Onetouch, Mr. Phillip Sowah said the cellular network's decision to appoint Dede Ayew as its sports icon was informed by the young player's impressive showing in the game in which his father left an indelible mark.

“We are glad that you are on board as our sports icon. Young players in the country are looking up to you for inspiration in order to get to the level you have attained. We hope you will inspire such players to get to your current level.

“We were impressed with your performance at the just-ended Africa Cup of Nations tournament, and we know you epitomize the subscriber base we are looking for,” Mr. Sowah said.

Spelling out the duties Dede Ayew is expected to discharge in his capacity as Onetouch Sports Icon, the Marketing Manager of Onetouch, Mr. Stephen Badu said the young player was expected to be the face of Onetouch in their promotional activities targeted at the player's contemporaries.

“Onetouch is a network, which is growing phenomenally. Your career is also growing at a phenomenal rate. We both have something in common.

“We are reaching out to the youth, and being a player who falls within this category of our target market, we hope you will be a great ambassador for us,” he said.

Mr. Badu reminded Dede Ayew that fame comes with glory and responsibility, saying, “We expect you to put up a good show like your father without giving Onetouch cause to worry in this relationship”.

In response, Dede Ayew, who came to the ceremony in the company of his Public Relations Manager, Jamil Maraby, expressed appreciation to the top brass of Onetouch for the honour done him, and promised to do his best to further uplift the image of the cellular network.

“I know Onetouch is the only cellular network in the country that is fully Ghanaian-owned. I will work hard to enhance the image of Onetouch. I promise to give hundred percent,” he assured.

After the unveiling ceremony, Mrs. Stella Appiah Nkansah, Chief Officer/Human Resource Department of Ghana Telecom presented a package from the company to Dede Ayew after which he was conducted round the various departments of the company to acquaint himself with the operations of the company.