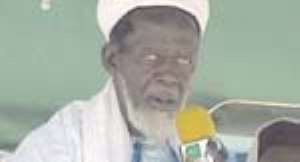 THE NATIONAL Chief Imam and the Muslim Council of Chiefs have endorsed government's decision to investigate the problems that rocked this year's Hajj.

Disclosing this yesterday to thousands of Muslims who thronged the Independence Square in Accra to celebrate the Eid-Ul- Adha festival, a member of the EID Committee, Alhaji Mamah G. Mohammed said the Chief Iman and the Council were also in support of the call by the MP for Ayawaso East, Major Dr Alhaji Mustapha Ahmed (rtd) that a judicial enquiry be made into the organization of Hajj over the past five years.

He noted that through such a comprehensive enquiry, the flagrant Hajj mismanagement would be stopped, noting that move could also allow the fear of God to manifest and take hold in the management of Hajj in the country.

Alhaji Mohammed expressed regret about the problems that the pilgrims had to contend with, and apologized to President Kufuor, the pilgrims and Ghanaians for the manner in which this year's Hajj operations were handled.

He said it was important for Ghanaians not to jump into hasty conclusions about this year's Hajj, noting that in passing judgment, they ought to be circumspect and exhibit understanding in order to have a balanced appraisal of the facts and the realities surrounding the sad event.

Speaking earlier, the Minister of the Interior, Hon. Kwamena Bartels, said since the inauguration of the Fourth Republic, Ghana had made an enviable name for itself as a citadel of democracy, adding that 2008, as an election year, would present a major test for Ghanaians to justify the peace prevailing in the country.

The Interior Minister, who represented the President, who was said to be on an official duty elsewhere, said the President was committed to free, fair and peaceful elections next year, and urged Muslims to pray for that peace.

He touched on the forthcoming Ghana 2008 football tournament, and reiterated that the fiesta would provide opportunities for Ghana to showcase her unique potentials to the rest of the world.

The National Chief Imam, Sheik Osman Nuhu Sharabutu called for unity among Moslems, and appealed to Ghanaians to desist from acts which could plunge the nation into chaos.

He said it was equally important for Ghanaians to respect one another's views, advising all to disregard their political affiliations and respect whoever would emerge president in next year's polls.
Sheik Sharabutu prayed for Allah's continued favour for President Kufuor and Ghanaians in general.

At Ashongman, our reporter, Mike Avickson reports that the Ameer and Missionary in charge of the Ahmadiyya Muslim Mission in Ghana, Maulvi Dr Wahab Adam led thousands of Ahmadi faithful for the Eid-Au-Adha prayers at their prayer grounds, and stressed the need for peace in the country.

He reminded Ghanaian politicians of the need to conduct themselves in a matured manner in order to maintain the peace the country is currently enjoying.

Maulvi Dr Wahab Adam further tasked politicians to let their pronouncements be devoid of rancour and castigations, if indeed they are stewards of the nation and have the goodwill of the people and the nation at heart.

He urged Ghanaians also not to allow diversity in religion, politics, and ethnicity divide them, but see themselves as one people with a common aim to harness efforts, skills and potentials to build a strong and united nation.

The Ahmadiyya Head further entreated the citizenry to use the occasion of the sacrifice to team up with government to develop the nation.

He advised those in charge of the Hajj programme in Ghana to take a second look at the arrangements and rectify their shortcomings to make the Holy Pilgrimage enjoyable and memorable.

Eid Ul-Adha, an important religious festival on the Islamic calendar, is celebrated by Muslims the world over to commemorate Prophet Abraham's act of faith in offering his beloved son, Ishmael, as sacrifice to Allah.

During the period of the festival, Muslims are given the opportunity to fulfill the duty of going to Mecca for Hajj, one of the five pillars of Islam.

The Hajj thus provides an opportunity and a forum for Muslims from all over the world to congregate, fraternize and pray for peace and harmony for mankind.