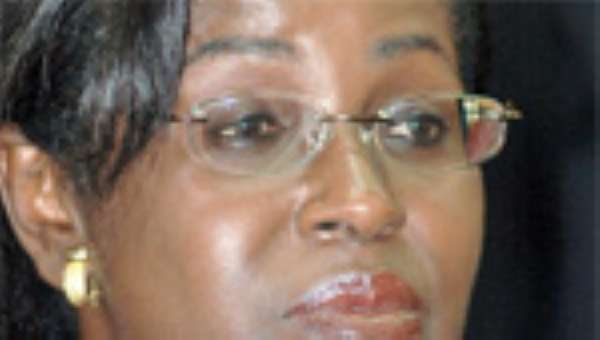 THE KUMASI Central Market Women Traders' Association (KCMWTA) has called for the election of a first female president for the country.

According to the association, the vital roles being played by women in recent times towards the development of the country underscored the fact that the time was ripe for the country to have its first female president.

The association mentioned the numerous achievements of the first female Chief Executive of Kumasi Metropolitan Assembly (KMA), Madam Patricia Appiagyei to buttress the association's conviction that it was time a woman was elected president of the country.

The KCMWTA is of the strongest conviction that with the able leadership skills of Madam Appiagyei and others, a competent woman would soon emerge the president of the country.

Mrs. Augustina Ofori Amanfo, President of KCMWTA who made these disclosures at a press briefing in Kumasi recently, admonished the populace to embrace and appreciate the vital roles women were playing towards the country's development.

She said after the appointment of Madam Appiagyei as Chief Executive of KMA, residents in the metropolis had expressed doubts about whether a woman could do the job.

“Instead of supporting Madam Appiagyei to deliver, residents in the metropolis sadly criticized her appointment on the basis that she is a woman and for that matter cannot perform,” she complained.

Mrs. Amanfo praised the mayor of Kumasi for performing excellently since her assumption of office two years ago.

“Madam Appiagyei has proved to all that indeed it is true that whatever a man can do, a woman too can do even better,” she noted, adding that the KMA chief executive has raised the image of women in the country.

Mrs. Amanfo enumerated the decongestion and beautification exercise in Kumasi, the Oti land-fill site which is expected to be used to produce electricity and the numerous sister-city relationships that Kumasi is currently enjoying with other cities around the world as some of the major achievements of Madam Appiagyei.

She debunked assertions that being a woman was a deficiency, reiterating that women were now capable of competing with men in all fields.

Mrs. Amanfo called for total support for women who are occupying high public positions in the country, adding, “Ghanaians should desist from pulling down those who are in high positions.”

She urged the citizenry to always encourage their leaders so as to motivate them to do their best towards the effective development of the country.

In a related development, the Royal Keep fit Club at Dichemso, a suburb of Kumasi, has thrown its weight behind Madam Appiagyei, praising her for performing wonderfully as KMA boss.

Mr. Eric Atta Yeboah, Vice President of the club in an interview with DAILY GUIDE, particularly praised Madam Appiagyei for ensuring a successful decongestion exercise which has beautified Kumasi and its environs.

He said Kumasi, under the able leadership of the mayor, was now gradually regaining its former image as the “Garden City of West Africa”.

He therefore appealed to residents in the metropolis to give the KMA boss all the needed support and assistance for her to continue with her good works.