National Orientation Is Not Political Gimmick-Oboshie 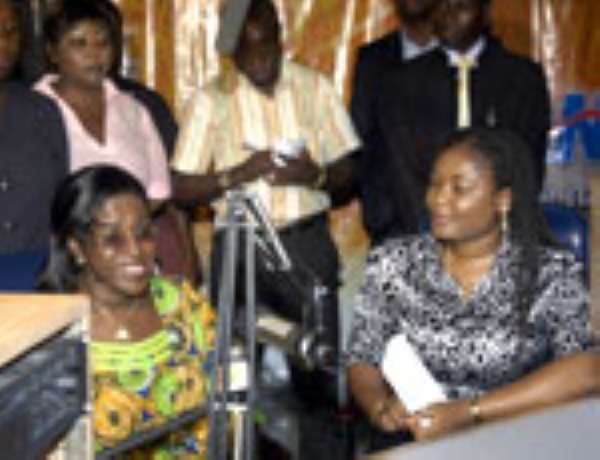 She said, President J. A. Kufuor, on realising that the nation was 'loosing its Ghanaian mentality,' introduced the concept, for a change of attitude towards achievement of national cohesion and development.

Hon Oboshie Sai Cofie observed that the nation had a checkered history and some events of the past might have led to the current situation prevailing in the country.

The Minister said the National Orientation concept 'was not a new finding' being introduced by Government to instill in the people a sense of patriotism, positive attitudes, productivity, accountability, dedication and discipline.

These sterling qualities, she said, had been infused in the five pillars of the national orientation concept, adding that Government had the responsibility to play a leading role to facilitate attitude change, and urged the people to contribute their quota towards the drive for change.

She described Ken City Media as a 'media empire' and commended the management and staff for the good work. She disclosed that her visit was to forge closer collaboration with the media to enable MINO disseminate Government Information.

The Minister said that although there was a lot of progress on the Ghanaian media landscape, some challenges needed to be addressed, especially in the area of training.

The Vice-President of the company, Mrs Stella Agyepong, welcomed the Minister and said the company had adopted 3-prong approach to disseminate information due to inadequate information available to the public.

She commended the Minister for taking time off to interact with the media, adding that the tour would bring Government closer to the people.

Hon Oboshie Sai Cofie  who also called at Radio Universe said the quest to really appreciate the challenges confronting the media is what compelled MINO to draw closer to assist in the dissemination of government information since the media are key partners.

The Minister noted that with the advent of more radio stations, there was the need for some regulation and if MINO 'does not get closer they will be mix match' she added.

At Choice 102.3 FM, Hon Agyekum explained that their visit was part of the media walkabout and the purpose was to acquaint themselves with their operations and share ideas on governance.

Hon Sai Cofie said MINO's concern is how to ensure journalists do research and to be accurate in their reportage. She cited a case in which a national daily reported an inaccurate story and instead of giving it the same prominence the story received, it chose to bury it in the middle pages.

The Minister's last call was at Sunny 88.7 FM where Mr Stephen Eshun, General Manager of the station received and conducted the Minister and her entourage round the station.

The Minister also called on the Nii Addo Ansah Otwatin II Asuo Wulomo of Aboafumla Traditional area who appealed to the Minister to help launch the market on July 1 2008.

Hon Amadu Sorogo informed the Minister that the frontage of the market, which had been invaded by hawkers had been earmarked for a car park and the contract awarded. They are currently relocating the hawkers into a new market for construction work to begin, he said.

Later in an interaction with the market women, Hon Sai Cofie explained that the purpose was to find out their awareness of Government development programmes like the National Health Insurance Scheme, the capitation grant, school-feeding programme among others and to help confront the challenges. Please click here to view photos