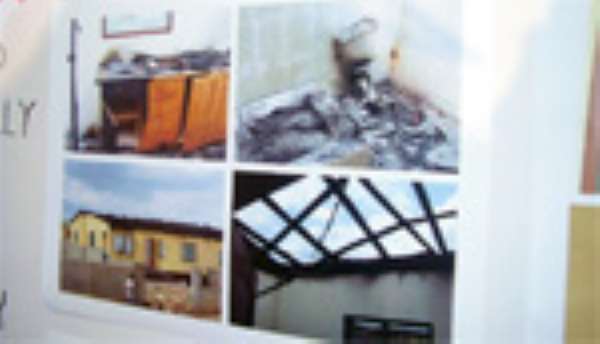 The properties of Agric-Cattle Lakeside Estate Limited, which were destroyed by a mob of land guards, had been estimated at ¢1.5 billion.

Agric-Cattle Lakeside Estate is a real estate company located at Ashale-Botwe, near Madina in Accra, and on September 24, 2007, the company was attacked by a mod of land guards, who totally burnt down two completed houses. They also burnt partially, three completed ones of the company.

The mob as well destroyed three concrete mixers and damaged the walls of four uncompleted houses. Before this attack, the company was said to have been subjected to daily attacks by the same mob.

Information reaching CITY&BUSINESS GUIDE indicated that appeals to the Madina and Adenta Police by the company for their intervention and protection yielded no results.

“Strangely, whenever the Adenta or Madina Police arrived on the scene of the attacks, they rather arrested the security guards of Lakeside Estate Limited,” Board Chairman of the company, Dr Kwame Gyamfi said at a press conference in Accra yesterday.

He cited an instance where on September 5, 2007, Lakeside Estate was attacked by a mob of land guards, noting that when the company's security beat off the attack, the Adenta Police came to the site and arrested one of the Lakeside's security men.

Dr Gyamfi further recalled that on September 7, 2007, the Madina Police came to the site with an encroacher and arrested one of the company's contractors working on the land.

The Lakeside Estate Board Chairman said the anti-business experiences that his outfit was going through were being watched by the business and investment community.

He questioned: “If a local investor, such as Agric-Cattle Lakeside Estate Limited, can be harassed unjustly and denied Police protection under the cloud of some backward and barbarous concept of retrospective law, then what future is there for the investor who is now being wooed into Ghana?”

He said Lakeside Estate Limited was the rightful owner of the land, stressing that “the lease was signed by Nii Afotey Odai IV, then acting Nungua Mantse in September 1995”.

Dr Gyamfi added: “Subsequently, the title was perfected under the Land Title Registration Law 1986, and documented as Land Title Certificate No. TD.0513.”

He observed that since the encroachers of the Lakeside Estate property were many, and included high profile personalities, the situation had affected the neutrality of the Adenta and Madina Police personnel some of whom were alleged encroachers of the land.

He specifically mentioned Hon. Joseph Nii Laryea Afotey-Agbo, Member of Parliament (MP) for Kpone Katamanso and Nii Otu Akwetey IX of Katamanso as some of the people that were stoking up the fire of hatred to consume the company.

Dr Gyamfi therefore challenged them to address the specific matters raised about the process of Lakeside Estate acquisition of the land title certificate and show where the company cheated, faulted or defrauded.

Meanwhile, the Madina and Adenta Police are taking steps to arrest and bring to book the people involved in the arson and theft of building materials.