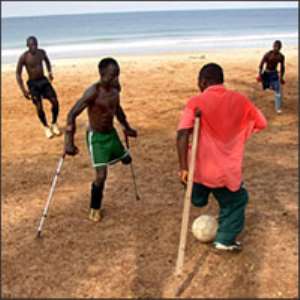 MONROVIA, Liberia -- What Dennis Parker likes most about being a soccer star is the way strangers greet him on the street with shouts of "Big Player."
Which is a lot better than a year ago, when they used to jeer and call him "Killer."

The Journal's Michael M. Phillips reports from Monrovia, Liberia, where some postwar victims have made an art of soccer.

Back then, they'd see him -- a beggar with one leg -- and guess correctly that he had lost the other one fighting in Liberia's 14-year civil war. In that conflict, many boys and young men routinely raped, robbed and murdered in a drugged-up frenzy.
Now they see one of Liberia's best one-legged soccer players. "I love that," Mr. Parker says. "Soccer made me to be well known in Liberia."

The Amputee Football Federation of Liberia is a single, small answer to one of the most intractable questions in postwar Liberia: what to do with 100,000 former militiamen, many of whom started fighting as boys and grew up thinking that the unspeakable was acceptable. Similar questions echo through other African countries, from Uganda to Sierra Leone to Sudan, where children have been given guns and thrust into the breach.

The quandary is especially vexing when it comes to amputees. Deeply impoverished, Liberia offers no welfare for the disabled, who find the few jobs that do exist beyond their grasp. "After 14 years of war, we're still grappling with the aftermath in all its different shades," says the Rev. Robert Karloh, one of the soccer league founders. He believes the sport helps make men like Mr. Parker, and Liberia itself, whole again.

Indeed, amputee soccer in Liberia is as much about reconciliation as it is about competition. Former fighters from enemy militias now wear the same uniform. Mixed among them are civilians who got caught in the shooting and slashing. Together they play, sing victory songs and share pairs of shoes, according to fellow amputees' needs.

Mr. Duo won't even consider the possibility that one of his opponents, or maybe even a teammate, might have wielded the blade that left him an amputee. "A game like this brings us all together and makes us feel like human beings," he said during a break in practice earlier this month. "This is the time for us to reconcile. It's not time to look at the past."

The amputee soccer league was born of an act of desperation. In late 2005, some 300 amputee fighters stormed the Monrovia headquarters of the political party of former president Charles Taylor. He had overthrown Mr. Doe and ruled for 13 years before being ousted himself in 2003. Mr. Taylor now sits in a cell in The Hague, where he's standing trial for atrocities his men committed in neighboring Sierra Leone.

The amputees who stormed the party headquarters had served in various militia groups during the war. They shared a sense of injustice and abandonment, and their anger was focused on Mr. Taylor's party. They had no jobs, no pensions and, with their empty sleeves and pant legs, no way to hide their past. They spent their days loitering around grocery stores or busy streets, begging for money. Many were still hooked on the drugs -- crack cocaine, heroin and others -- that their militia commanders had supplied to get them to fight more fiercely.

One of the players is Richard Duo, a 21-year-old striker for the Paynesville Survivors. In 1990, when he was four, former President Samuel Doe's men massacred 600 people in a Lutheran church in Monrovia. One of the soldiers chopped off Mr. Duo's left leg with a sword.

Mr. Parker, his front teeth missing and hair arranged in a swirl of tight plaits, emerged as a spokesman for the squatters. He had taken up arms for Mr. Taylor in 1990 at age 16, after then-President Doe's soldiers opened fire on civilians in Mr. Parker's hometown, Tubmanburg. Still, his enlistment wasn't entirely voluntary. "They kill you if you don't join," says Mr. Parker, who has a sixth-grade education.

Taylor militia commanders gave him his first gun, an AK-47 assault rifle, and sugar-cane alcohol to make him brave enough to use it, he says. They assigned him to a special unit, called the Strike Force, that was sent to carry out missions others would not. "I killed my enemies," but not civilians, he says. "No, no, no." Pause. "Maybe mistakenly."

He admits to looting food, clothes and money from stores and homes, but denies taking part in the rapes he says he saw fellow militiamen commit.

One day in 1993, his platoon from the National Patriotic Front of Liberia met up on a dusty road with boys from the United Liberation Movement of Liberia for Democracy, one of several rebel groups. A round hit him in the right shin, shattering the bone. There were no medics, so his comrades put him in the back of a pickup truck and went looking for a doctor.

For the next year, he was in and out of hospitals. His leg worsened, and he remembers begging a doctor for a lethal injection. For months, though, he resisted doctors' advice that he undergo amputation. "It's not easy to decide to have a part cut off," he says now. Finally, one doctor gave him a magazine article about a man who refused to allow his cancerous toes to be cut off. The disease spread to the man's brain and killed him.

The cautionary tale convinced Mr. Parker. In April 1994, the surgeon cut off his right leg below the knee. After recovering, he made a living selling cassette tapes from a roadside wooden booth. But he rejoined the militia after Mr. Taylor was elected president in 1997 and assembled an unarmed unit of veterans wounded during his guerrilla campaign. Mr. Taylor made Mr. Parker a battalion commander, despite the fact that his leg ended a few inches below the knee and he didn't have a prosthesis.
When Mr. Taylor's regime faced a fierce rebellion of its own, Mr. Parker and his men rearmed and manned checkpoints.

After Mr. Taylor fell and United Nations peacekeepers took control of the country, Mr. Parker found himself sleeping on the street with his girlfriend and two of his children, begging for change. Now 33, he has fathered seven children, whose lineage he recites with great concentration. "I born two from Jatu. I born one from Cleo. I born one from Mary. One from Yata. One from Gbesay, and one from Mirma."

By the time he and the other amputees occupied the Taylor party headquarters, he was a desperate man. He still admired Mr. Taylor, but was angry that the party had done nothing for the men who had given them power. The building "belonged to us, especially the veterans," he says.
The amputee occupation dragged on for months, with the party threatening to use force to oust the squatters. The man eventually sent to negotiate with them was Mr. Karloh, a 43-year-old Pentecostal minister and deputy executive director of the National Commission on Disarmament, Demobilization, Rehabilitation and Reintegration.

Mr. Karloh, stocky with bushy eyebrows, found Mr. Parker one of the most aggressive of the amputees. He was bitter and depressed, and sometimes spoke of taking his own life. "I'm willing to die," he told Mr. Karloh.

The reverend fired back from the Book of Jeremiah: "For I know the plans I have for you, declares the Lord, plans for welfare and not for evil, to give you a future and a hope."
During the month Mr. Karloh negotiated with the squatters and fended off the more belligerent plans of Taylor party officials, he added his own message to the one-legged men: "The amputation does not remove God's purpose for you."

Last August, 10 months after the occupation began, Mr. Karloh negotiated a settlement in which Mr. Taylor's party paid each man $30 and the amputees agreed to leave quietly.
The incident drew Mr. Karloh to the amputees' plight. Since the fighting stopped in 2003, the U.N. has disarmed 103,019 Liberian fighters, out of a total national population of about three million. The U.N. provided each fighter with a $300 demobilization payment and free basic and vocational education. Still, with Liberia's economy a shambles, 75,000 of the former fighters remain jobless, according to government estimates.

The amputees are among the worst-off. "A disabled man is useless to society," says Eric Myers, 39, who lost a leg to shrapnel wounds while fighting for Mr. Taylor.

Mr. Karloh had heard of war amputees playing soccer in Sierra Leone, and he thought a similar program would be therapeutic for Liberia's veterans, too. Last September, a month after the standoff at the Taylor party headquarters ended, Mr. Karloh, Mr. Parker and a few others met at Mr. Karloh's office and founded the country's first team, Liberia Amputee Sports Association, or LASA.
On New Year's Eve, LASA played its inaugural match, against a team from Sierra Leone, and was soundly trounced. But the team placed second of five teams at a tournament in February, and, after they returned home in glory, the U.S. government donated $30,000 in uniforms, cleats, crutches and other goods. The league has since expanded to 150 players and six teams, including the Brewerville Young Invaders, the Monrovia Giants and the Island Warriors of Bushrod Island.

The rules of amputee soccer differ from those that govern the regular sport, and they start with this: In the land of the one-legged, the one-armed man is goalie. The goal is half as wide as a regulation net. But the goalie can't leave the box and he can touch the ball only with his intact arm, not his stump.

The other players each have one leg and play on metal crutches with arm braces; few Liberian war amputees have prostheses. Touching the ball with crutches is the equivalent of a handball. A free kick results if the infraction takes place outside the box and a penalty kick if it occurs inside. Teams practice almost daily and have games about once a week.

LASA is the unrivaled league powerhouse, and Mr. Parker is the team's dominant striker. He scored a hat trick in LASA's 5-2 victory this month over the Sinkor Mighty Conquerors, two goals on powerful drives from the left wing and another on a penalty shot after a defenseman's crutch-ball in the box.
When Mr. Parker takes a shot on goal, he resembles a gymnast on a pommel horse, suspended from his crutches and swinging his leg through the middle like a pendulum. When he races for the ball, his stride is a cross between a gallop and a hop, a motion that is both graceful and athletic. After he scores, Mr. Parker performs a joyous, airborne jig and bumps torsos with another LASA player.
With soccer success, other parts of his life have begun to turn around, albeit in small ways. For $5 a month, he rents a room in a house on the outskirts of the city, where he lives with his girlfriend and four of his children.

When he's not playing, he makes a bit of money by buying palm oil in villages and reselling it in Monrovia. He is no longer ashamed to ask his family for help.
But Mr. Parker no longer begs.

"I see myself as a big player now," he says.