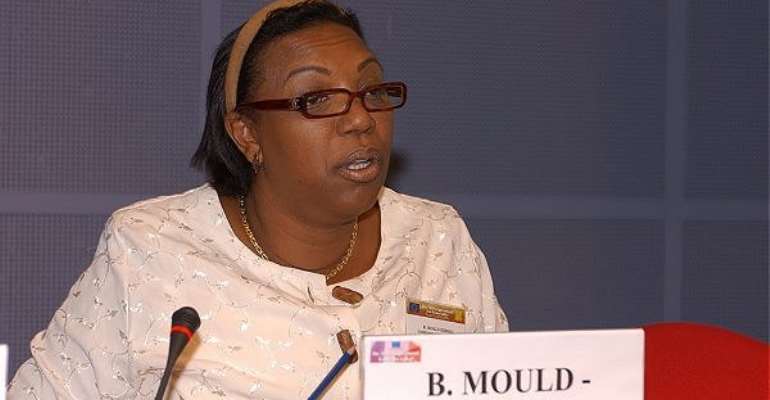 The flagbearer of the National Democratic Congress (NDC), Professor Evans Atta Mills' prerogative of nominating a running mate to partner him to venture into the 2008 elections has taken an unexpected twist, with the Professor finally settling on the wife of one of the party's contenders to the flagbeareship position last December, Alhaji Mahama Iddrisu.

An unimpeachable report reveals that the former Vice -President has kicked against all propositions to have the former First Lady, Nana Konadu Agyeman Rawlings nominated as his vice presidential candidate to give the wife of Mahama Iddrisu, the former Defence Minister in the NDC regime, Madam Betty Mould Iddrisu the nod.

This therefore brings to an end a year long speculation on who Prof. Mills would pick to partner him for the 2008 elections

Madam Betty Mahama, who is currently the Director of Legal and Constitutional Affairs Division of the Commonwealth Secretariat has held several positions including the Chief State Attorney at the International Law Division of the Ministry of Justice.

Madam Betty Mould Mahama is a gender activist and was the African Regional Director for the International Federation of Women Lawyers.

Barring any unexpected hitches, Professor Mills would on Sunday lead an NDC delegation to the house of the former President who is credited as the founder of the party for the endorsement of the nominee of the flagbearer.

The source said Prof. Mills settled on Madam Betty Mahama as a result of her worth of experience and competence in international affairs.

Madam Betty Mahama who hails from Ankaase in the Ashanti Region, the source said has all it takes to ensure that the NDC's thirst for political power in the 2008 general elections becomes successful.

According to the source, Professor Mills has partnered men as running mates in two different general elections but could not secure electoral victory, adding that he (Prof Mills) decided to name a lady because he believes she has the wherewithal to secure victory for the NDC.

"I believe you know presently that there is a clarion call for women to be given the chance to take challenging positions in the country so as to serve as role models for other capable women.

The Prof's decision was reinforced by that clarion call", the source explained.

According to the source, Professor Mills has once again demonstrated to his critics that when it comes to taking very firm political decisions, he is his own man who defiles all barriers to have his way through.

The source said, Professor Mills would within a week's time submit the name to the former President and the Council of Elders for his endorsement and blessings.

This means that the most affable and liked-by-all NDC Member of Parliament for Bole Bamboo, Hon. John Dramani Mahama may for the third time lose the bid to become the running mate for the twice defeated Presidential Candidate of the NDC.

The source told this reporter that after due diligence was done on many of the potential running mates, Professor Mills discovered a major weakness of Hon. John Mahama, which is that he does not have the political venom to spew on their main rivals, the New Patriotic Party (NPP).

In the run-up to the 2004 general elections, Mr. Mahama was tipped by many as the person to partner Professor Mills but the position slipped him and went to the former MP for Kumbungu, Alhaji Mohammed Mumuni.