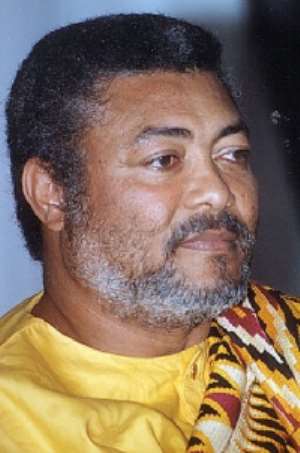 The Ghanaian Lens has never been in doubt that no matter what the NPP and their paid agents would say about Flt Lt. Jerry John Rawlings, the good side of Ghana's history cannot be written without mentioning the name of the former Airforce pilot.

For sure, Jerry Rawlings is not without fault, but The Ghanaian Lens would stand up any day and salute the former president for defying the odds and taking the bull by the horn at age 33, and taking the country out of the deep-end of darkness and bringing her into the shiniest part of light.

The Ghanaian Lens would salute the former president the more if we consider the kinds of extremely unacceptable things that are happening in Nigeria.

Nobody can deny that retired Army General, Olusegun Obasanjo, is exhibiting nothing other than despotic tendencies as he sits on top of one of the most shambolic elections in the history of Africa's attempt at growing her democracy.

Obasanjo is not perpetrating himself physically but is obviously making sure that a surrogate of his takes over from him so he can continue with his rule from the shadows.

The situation is so bad that even in States where voting did not take place, results have been declared in those states.

Ask us how the INEC was able to declare results in States where voting did not take place, and The Ghanaian Lens would not be able to tell how those figures were conjured.

The situation is so bad that apart from the ECOWAS Observer Team that has in a tongue-in-cheek manner given the thumbs up to what has taken place in Nigeria, all the local and foreign Observer Teams have discredited the polls and asked that there be a rerun.

The Ghanaian Lens asks that Jerry Rawlings be given a salute because he could have done what Obasanjo is doing, or done worse.

But as somebody who started as a “dictator and ended up as a democrat” (to quote Ali Mazuri), we cannot help but salute the former president for handing over peacefully to Kufuor.

Just like Obasanjo, who has shown that rigging and election for his surrogate is something he would do without butting an eyelid, who says that if President Rawlings wanted to ignore better judgment and rig the elections in favour of Prof Mills, he couldn't have done so?

Indeed, on the day of handing over, the former president, via sign language, made Ghanaians understand that whether NDC or NPP we are all one.

If that was not the mark of a true democrat, then we don't know what is.

The Ghanaian Lens is not oblivious of the fact that some groups of persons in Ghana would have the world believe that they forced the former president to hand over and that he did not do so on his own volition.

As much as we would grant any group of persons their line of thought, The Ghanaian Lens knows that it took the magnanimity of the former president to allow Kufuor to become the fortuitous president that he is.

Minus the high-mindedness of the former president, he could have clung on to power and ruled by the whip or plunged the country into a state of civil war.

President Rawlings handed power to Kufuor because that it what he wanted to do and that is why worldwide, he is highly respected and treated like a rare gem in spite of the puerile attempt by the NPP to continuously paint him black.

The Ghanaian Len would forever salute Flt Lt Jerry Rawlings for his smooth hand over of power to Kufuor, and nobody or anything would stop us from paying him that complement.

As for what is happening in Nigeria, courtesy the misrule of Obasanjo, who happens to be the best friend and political mentor of Kufuor, we leave the good people of Ghana and the world to decide for themselves who the true democrats are.