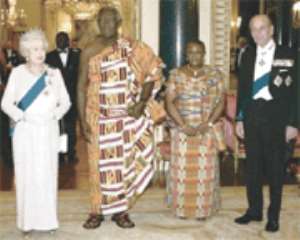 The Queen has described Ghana's effort at national development over the last 50 years of her independence as commendable, in spite of some reverses.

She, therefore, assured Ghanaians of Britain's forward-looking and reliable partnership for the next 50 years.

Proposing a toast at a state banquet in honour of President J. A. Kufuor at the Buckingham Palace on Tuesday night, Queen Elizabeth II said there were challenges in the ever-changing world but was certain that “as Ghana moves to face these challenges, she can rely on the United Kingdom as a strong supporter, dependable partner and loyal friend”.

Ghana has maintained excellent relations with Britain since her independence in 1957 and the two countries have co-operated at both bilateral and multilateral levels in political, economic and social sectors.

Currently, Britain is Ghana's biggest trading partner and the partner with the largest investment in Ghana.

Britain also provides a substantial amount of aid to Ghana through its Department for International Development (DFID) and other development agencies.

“Ghana today is a progressive, open society,” the Queen said, adding that “the economy is buoyant and growth and prosperity are being fostered by a pluralistic and lively political debate and by your responsible and forward-looking development policies”.

Those positive developments, she said, had allowed Ghana to benefit from substantial development cooperation and debt cancellation which promised to make a reality of the country's vision as the gateway to West Africa.

On the international front, Queen Elizabeth said Ghana had played a positive role in West Africa and beyond.

As a member of the United Nations Security Council, she said, Ghana had worked hard to advance the cause of peace. She paid tribute to the contribution of Mr Kofi Annan, the immediate past Secretary General of the UN, to international peace.

She commended President Kufuor for his commitment to the rule of law, his stand against corruption and the priority he attached to investment in basic social services.

These, the Queen said, underlined President Kufuor's determination to leave a legacy for Ghana as an increasingly stable, transparent and prosperous nation with a healthier and more skilled population.

Responding, President Kufuor, expressed appreciation to Britain for the goodwill she had shown so far towards Ghana in her development effort and observed that there were many investment opportunities yet to be explored.

He expressed the hope that the bilateral relations between Britain and Ghana in all areas would continue to flourish for their mutual benefit.

President Kufuor underlined Ghana's commitment to principles and ideals of democracy, good governance, respect for human rights, peace and security, which served as the unifying force of the Commonwealth.

Those ideals and principles, the President said, constituted the underlying forces of Ghana's efforts and contribution towards ensuring peace, stability and good governance especially in the West African sub-region.

While at Buckingham Palace, President Kufuor had the opportunity to look at artefacts from Ghana on display.

Minutes after the Ghanaian President had had lunch with his host, the Queen, the two stepped into the monarch's photo gallery where pictures and paintings, some of which are as old as 400 years, had been displayed.

Both the Queen and the President together with their spouses looked at pictures, souvenirs, letters and other documents that were prepared during the colonial era towards the preparation of Ghana's independence.

Some of the pictures on display included those about the Queen's visit to Akyem Tafo in the Eastern Region and a durbar held in her honour in Kumasi among other pictures during her visit to the country in 1961.

Other photographs at the royal gallery included one of Her Majesty presenting a gift to the Asantehene on her departure from Kumasi on November 14, 1961.

A picture of the Queen delivering an inaugural address at the Ghana Academy of Learning in November 1959 also has a place at the gallery.

Perhaps what drew the attention of some of the President's entourage, who later joined the Queen and her guests at the gallery, were items like the printed programme for some events organised by the colonial government before and after independence.

Later in the day, the President and his wife, Madam Theresa, arrived at the Westminster Abbey. They were conducted round by the Dean of Westminster, the Very Reverend John Hall.

A number of highly respected political, religious and traditional figures in the UK have their graves inside the Abbey. These include the tomb of David Livingstone.

Tema Interchange Project: For Once, Give Mahama His Credit B...
11 minutes ago