A Prez aspirant speaks for himself NANA ADDO: KOFI COOMSON AND I 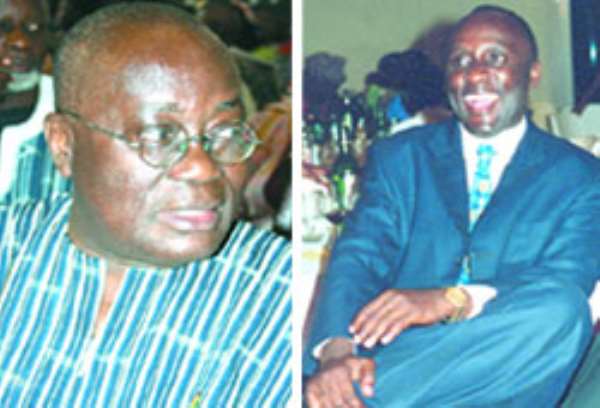 Nana Addo Dankwa Akufo Addo, Minister for Foreign Affairs and one of the New Patriotic Party's (NPP) Presidential aspirants has declared that there is no room for any division in the NPP, since the party was established to bring on board all breakaway members of the party in 1979.

Nana Akufo Addo, who was the publisher of The Statesman, was speaking to The Chronicle in an exclusive interview in Sunyani after the people's assembly, during which he also revealed that he and the Chief Executive Officer (CEO) of The Chronicle Group, Nana Kofi Coomson, were friends and both fought for democracy in the country.

Nana Akufo Addo indicated that Nana Kofi Coomson was somebody he has a lot of respect for because he is a pace setter, particularly in the media industry. He continued that The Chronicle publisher, as a Ghanaian, was entitled to his opinion and any constructive criticism and said he personally sees nothing wrong with Nana Coomson's pronouncements against him.

The Minister, who is also the MP for Abuakwa South, emphasized that since he is a public figure, he is not above criticisms from any quarters.

Continuing on the theme of unity, Nana Addo disclosed that the Danquah-Busia tradition had realized what had happened in 1979 and would not like to repeat that mistake, hence the formation of the NPP.

According to him, the formation of the NPP in 1992 was to ensure that any differences that used to exist in the party, which led the tradition to lose power to the Dr. Hilla Limann-led Peoples National Party (PNP) in 1979 would never happen again.

The Foreign Minister dismissed rumours, that he would be forming a political party if he fails to win the NPP slot as presidential candidate, and said he had no such intention since his ambition to serve the party and the nation had not been accomplished.

Nana Akufo Addo stated that he was not into politics for self-aggrandizement and selfish interests, but to ensure that the totality of the people of this country benefitted from him. The Foreign Affairs Minister added that he believes that the NPP, and no other party, was an instrument he could use to fulfil his ambition “Splitting NPP is not on my agenda, but to lead the party to accelerate national development”, he said.

ARROGANCE Questioned on the widespread perception of him, as very arrogant, Nana Akufo Addo threw the question back to this reporter and asked whether I had noticed any streak of arrogance in him, as people claim.

According to Nana, anyone who associates with him would testify that he Nana Akufo Addo is never arrogant, but a loving and accommodating individual.

On his Presidential ambition, the minister remarked that he was optimistic of winning the race, despite the huge number of aspirants.

Nana Addo noted that NPP was a party that could easily unite, immediately after they elect their candidate, adding that he was sure that before nominations for the party's flagbearer position opens, the number of aspirants would reduce.

He declared that he personally saw nothing wrong with the large number of Presidential hopefuls emerging on the scene.

According to him, he believed in democracy and what was happening in NPP demonstrated the party's commitment to internal democracy, adding that at the end of the day, the delegates of the party have to decide whom they want.

In 1998, the NPP registered 7 presidential aspirants and eventually elected Kufuor for the 2000 Presidential election. Nana Addo was the runner-up to then candidate Kufuor.

The Foreign Minister also touched on a number of economic issues and how the NPP government had transformed the weak economic base of the country to a very formidable one.

Nana Akufo Addo, who described the NDC's move to come back to power as a desperate one, declared that NDC as a party, had nothing new to offer Ghanaians, because the old people who ruled this nation for almost 20 years were still around.

This, he noted shows that the NDC today, is not different from NDC of yesterday and for that matter, Ghanaians should not give them the chance to come and drain what the nation had built since the NPP government took over.

Last week, a section of editors, mostly from the Coffee Shop Mafia, waged a well-coordinated attack on The Chronicle publisher over his criticism of the Akufo Addo person and presidential candidacy.

It was anchored by Messrs Yonni Kulendi, formerly a junior in the chambers of Nana Akufo Addo, from where he left to set up [email protected], Mr.Egbert Faibille, also a junior at the same law firm, who doubles as Publisher/Editor of The Ghanaian Observer, a weekly newspaper, Mrs. Gina Blay, Editor of The Daily Guide and wife of The first Deputy Speaker of Parliament, who is a director of the paper, The Weekend Crusading Guide run by Sedi Bansah, as well as Mr. Gabby Otchere-Darko, a cousin of the Minister who is part of his campaign team and Editor-in-Chief of The Statesman newspaper.

Mr. Osbert Lartey, Editor/Publisher of The Vanguard, was called to join in the assault, which dwelt on Coomson's lone struggle to battle six former Provisional National Defence Council (PNDC) Ministers for unjust acquisition of property and corruption, and his account of how he was left in the lurch by Yonni Kulendi, an issue that Kulendi went on air to tell the world as being a 'black lie,' but the Vanguard editor declined.

Kofi Coomson is on record to have said that he wheeled away from supporting Nana Addo in 1998 and switched to support candidate Kufuor after he, the Minister, failed to follow up leads to key people like Kwamena Bartels and the late Stephen Krakue, the father of the NPP in the Western Region, among other reasons.

He is also known to have gone on air to state that he would not be able to sleep easily under an Akufo Addo Presidency.

Last week, The Chronicle publisher won a temporary appeal to his editors on an anticipated open warfare, before announcing to his editors that he was quitting to concentrate on other interests.