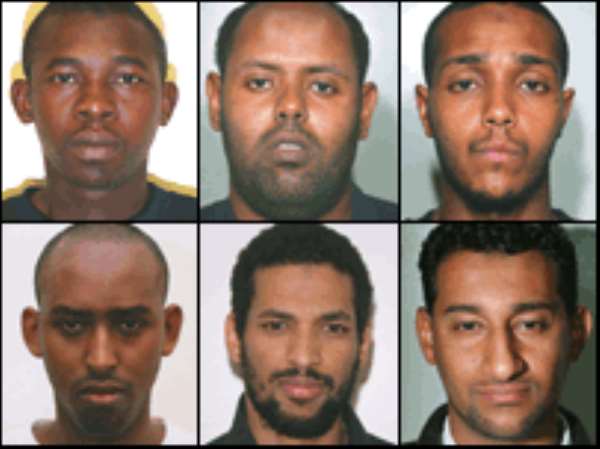 The six also deny charges of conspiracy to cause explosions.

Manfo Kwaku Asiedu
Manfo Kwaku Asiedu is a suspect in the investigation into the 21 July 2005 attempted London bombings. He was charged on 7 August 2005, with conspiracy to murder and conspiring to cause an explosion. After an unexploded bomb was found in Little Wormwood Scrubs park.Asiedu was the oldest of those suspected, and said to have no permanent address at the time of the alleged crime. There was initial confusion that Manfo was the son of Ghana's Deputy Inspector-General of Police, K.K. Asiedu, but his son was later tracked down and absolved. He is held at the Belmarsh prison, and his first court appearance was August 8th 2005.


Prosecutor Nigel Sweeney QC said the men chose a date for their plan "just 14 days after the carnage of July 7".

But the court heard how the conspiracy "had been in existence long before the events of July 7" and did not appear to be some "hastily arranged copycat".

The prosecutor told how six bombs were made using a mix of liquid hydrogen peroxide, chapatti flour, acetone and acid.

Evidence that the alleged bombers had been buying the materials necessary in late April 2005 would form part of the prosecution's case, Mr Sweeney added.

The court was told that one order of hydrogen peroxide placed at a trade shop was so large that a new batch of the substance had to be made especially.

Each bomb was placed in a large plastic container and screws, tacks, washers or nuts, were taped to the outside to "maximise the possibility of injury", he said.

He told the court it was unclear if the bombs had failed to detonate because they had been manufactured incorrectly at the flat or because of hot weather on 21 July affecting the chemicals.

Suicide note
He outlined the case against each defendant, saying all of them were "would-be suicide bombers" except for Mr Yahya, who was out of the country on 21 July 2005.

Mr Sweeney told the court how Mr Mohammed had written a suicide note which was found in pieces after his arrest, and how Mr Asiedu "lost his nerve at the last moment" and dumped his bomb.

The court also heard how Mr Ibrahim had been trained for jihad in the Sudan in 2003 and had also travelled to Pakistan the following year "to take part in jihad or to train for it".

The three, together with Mr Asiedu and Mr Osman, had also been among a group of 20 or more people on a camping trip to a farm in Cumbria in May, September 2004, he said.

Photographs of them on the last day of their trip by police officers on surveillance, were shown to the jury.

One of the defendants, Mr Omar, fled London after the attempted bombings and got on a coach to Birmingham disguised as a woman wearing a burka, the court heard.

Mr Sweeney said Mr Omar was arrested at a house in Birmingham, where he was found fully dressed standing in a bath with a rucksack on his back.

He said: "The evidence will show, amongst other things, that at the least of it Ibrahim, Omar, Osman and Yahya all held extremist views.

"Second, Ibrahim, Omar and Yahya had all spoken about carrying out jihad."

No hoax
Hussein Osman was eventually arrested in Rome, where he told police that the plot was a "deliberate hoax", not a serious attempt to kill commuters.

Mr Sweeney said: "Given the weight of the evidence as to his involvement, what could he say?

"The prosecution case is that this was no hoax."

He added: "The failure of those bombs to explode owed nothing to the intention of these defendants, rather it was simply the good fortune of the travelling public that day that they were spared."

The six men were all known to each other by the summer of 2005, Mr Sweeney said.

The jury heard that Yassin Omar's one-bedroom flat in New Southgate, north London, was a bomb factory, "where the great majority, if not all, of the work required to make those bombs was carried out".

On 22 July 2005 - the day after the alleged bombing attempts - a caretaker at the block of flats found a large number of hydrogen peroxide bottles in communal bins and called police.

The trial at Woolwich Crown Court is expected to last up to four months.