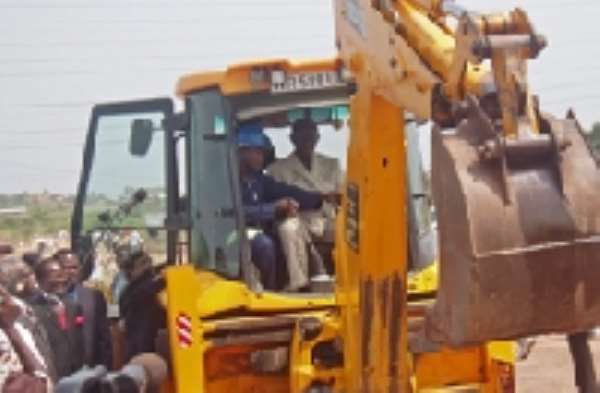 President John Agyekum kufuor has launched the Kumasi roads and urban development projects at a ceremony in Kumasi.

The projects, which are being funded by the Agence Franciase de Developpment (AFD) of the French Government at the cost of 25.5 million Euros is made up of five components.

They are, the Sokoban Wood Village Access Road and Resettlement Enclave, the 3.2 kilometre Oforikrom-Asokwa By-pass, the Asafo to Ahinsan section of the Lake road, Lake Road interchange and landscaping of the banks of river Aboabo.

The projects are designed to provide the missing link of the ring road between Oforikrom and Anloga. It will also require the relocation of wood workers at Anloga, improve traffic flow on the lake road, remove the bottlenecks at major intersection between the lake road and the ring road as well as enhancing the environment.

The President used the occasion to cut the sod for the commencement of construction works on the Sokoban Wood Village Complex to resettle the Anloga wood workers.

The 100 billion cedis project will involve the construction of access roads from the Bulk Oil Storage Transport road to Sokoban village with walkways and a bridge over river Aboabo and landscaping.

Speaking at the ceremony, President Kufuor said Kumasi had over the past two decades witnessed a phenomenal growth in terms of population, size, social and economic activities, which had not been matched by commensurate infrastructural development, resulting in various forms of inconvenience, including unprecedented levels of traffic congestion.

He said to address the problem, the government with assistance from the AFD, undertook a major transportation planning and traffic management study in 2003 as part of the Road Sector Development Programme.

The President said as a result of the studies a number of strategies had been adopted to manage and improve traffic flow in the city in the short to medium and long terms.

These include the development of the arterial road networks, interchange development programme, traffic management and road safety improvement as well as public transport service improvements.

He said the government would pay fair compensation to owners whose properties would be affected to ensure that construction proceeded expeditiously.

The President charged the Department of Urban Roads to ensure the completion of the project not only within time and cost but also to specification.

He commended the French government for its continuous assistance to improve the road network and other infrastructure in the country.

Mr Magnus Opare Asamoah, Deputy Minister for Transportation said the Kumasi Metropolitan Assembly (KMA) would own the Sokoban Wood Village and appoint a private firm to manage it in an efficient manner.

He said a further amount of 500,000 Euros had been allocated for the management of the resettlement of the Anloga Wood workers to the Village.

Mr. Patrick Mollie, Secretary General of AFD, said one of the major challenges facing the Ghana government was how to improve urban infrastructure and services to the people.

He said the Sokoban Wood Village project, which was expected to be completed by the end of 2007, would enhance productivity among the wood workers.

He pledged the continuous assistance of the AFD to the government to promote development in the Kumasi metropolis.

Mr Emmanuel Asamoah Owusu-Ansah, Ashanti Regional Minister, said the development of urban roads in Kumasi was very dear to the hearts of the residents.

He gave the assurance that, he would not allow anyone to unduly delay the project and appealed to property owners to contact appropriate government agencies to resolve all issues relating to the project.

Mr Owusu-Ansah also charged the contractors and workers to ensure that the project did not suffer undue delays.