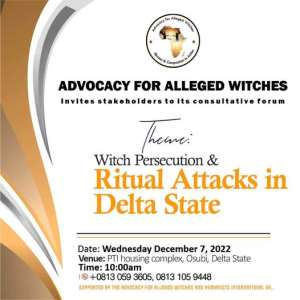 The formation of the Advocacy for Alleged Witches (AfAW) has continued to generate reactions from the public. The purpose of this piece is to highlight these reactions, clarify the misconceptions, and properly situate the mission and objective of AfAW. Recently a well-meaning Nigerian asked us to change the name of the organization. He was not the first to do so. He stated that the caption, Advocacy for Alleged Witches) was repulsive. Repulsive? He said: "The goal of saving the elderly with medical challenges and stigmatized children (all ignorantly and wrongly dubbed witches and wizards) can still be achieved with a far more creative and imaginative title or caption". Interesting. I wondered what could be more creative than the title, Advocacy for Alleged Witches. What else could be more imaginative than this clear and crisp name? No ambiguity as to what it stands for and what it meant to achieve. I mean, how is this focused title nauseate to anyone unless the person is mentally held hostage by occult fears and anxieties?

I asked the person who made the post to clarify and further explain so that we could review or consider revising the name. He responded: "All I advise is that you rethink that name for you to make the desired impact. With that name, your otherwise good intentions will grossly be misunderstood". Indeed I understood his point even though I disagreed with it. I pretended not to have understood and inquired if he wanted us to change the name of the organization. And he answered in the affirmative stating that the name, Advocacy for Alleged Witches, would be misunderstood by the Nigerian public. He said: "An average Nigerian will misconstrue that to mean you are advocating for witchcraft! The prefix "alleged," won't change anything. You can still go ahead, but have this in mind".

As I noted in my reply to him, his was a valid point. And many campaigners have tried to avoid being misunderstood and have ended up choosing a vague name that obfuscated their objective and mission. At AfAW we have chosen a different pathway to address the problem.

In 2020, we had a hard time convincing journalists that AfAW was not and should not be described as a witches' group. Many news outlets described AfAW as an organization of witches. Do an online search and you would see some news headlines like "witches' group says so so and so" "Witches rejoice..". At some point, I had to confront a journalist from a major online newspaper over this and he explained that describing AfAW as a witches' group made a catchy headline. A catchy headline indeed. Now in the quest to attract more online traffic or readership, these media organizations sacrifice truth and facts about an important issue. They misinform the public, misrepresent the organization and reinforce a misconception.

In September, an incident buttressed the concerns raised by this gentleman. The police invaded and stopped a seminar of AfAW in Benue state. They claimed that they received some intelligence that witches were meeting and had been instructed to stop the meeting. I mean, police officers were at the venue of the event with their guns and vans to stop a meeting of witches. Is that not absurd? I guess some of them must have been there with charms to protect themselves against the witches. Even when they were properly informed about the event, the police insisted the program would not hold. They asked the organizers to reschedule for another date one one condition. That they should come before the next date and state clearly that they were not witches. Incidentally, the following day, a journalist from the state newspaper, who was at the event, published a report stating that the police disrupted "a meeting of witches and wizards". Just look at that! I was very furious. When I confronted her over the misleading headline she claimed that her editor chose the title so that more people could read the story. You see that? A case of a media outlet choosing to publish a misleading title to only attract readership.

At a workshop on gender and religion that was held in Cape Town in November, I introduced myself as the director of the Advocacy for Alleged Witches. I did not know that the introduction did not go down well with one participant. On the last day of the event, this woman from another African country came to me and said she would like to confess something. And I suddenly turned towards her. She said she had been looking at me with some suspicion since I introduced myself as coming from the Advocacy for Alleged Witches. That she resolved not to come close or associate with me because I must be one of them! But she was surprised that when she asked for my phone number I readily l gave it to her. And she thought: "Ah so these people (witches) also have telephone numbers". At that point, we all laughed out very loud. She told me that she was serious, she thought I was a witch. I believed her and I knew there were others at the event who viewed me the same way but who could not say so.

Some days ago, I phone one of the contacts of the Federation of Women Lawyers in Delta state to inform her about an upcoming event. I wanted the organization to send a representative. I phoned her at about 10 pm, which was quite late. Immediately I introduced myself as calling from the Advocacy for Alleged Witches, she boosted into laughter. And then she said, "And you are calling this night?" We laughed together. I want ahead to explain why I called. I get that kind of response very often. Any time I introduce myself as coming from the Advocacy for Alleged Witches, people's faces lighten up with some strange smile. Not necessarily out of excitement. More out of suspicion.

At AfAW we are aware that the mention of the name "witches" or "witchcraft" evokes fears and anxieties. Many people have been socialized to think and react that way. But this mode of reaction has to change. The name, Advocacy for Alleged Witches creates the impression that the organization supports and promotes witchcraft. Meanwhile, that is far from the truth. At AfAW we believe that witches as popularly known in Africa are superstitious imaginaries that people use to make sense of misfortune.

Part of the objective of AfAW is the tackle the misperception of witches, and witchcraft whether alleged or not. AfAW seeks to address associated fears and suspicions. It aims to correct the pervasive misconceptions and fears associated with the term witch or witchcraft because these misperceptions are at the root of witch persecution. Saving alleged witches cannot be realized until Nigerians disabuse their minds and free themselves from fears and suspicions that the term witches or witchcraft engenders. So the mission of combating witch persecution and supporting victims starts in the mind. It starts by demystifying the term witchcraft or witches. It starts by clarifying misconceptions and misperceptions that are linked to terminologies such as witches, witchcraft, and supposed occult forces.