Proposed sale of Saglemi Housing Project: The facts and the cheap politics 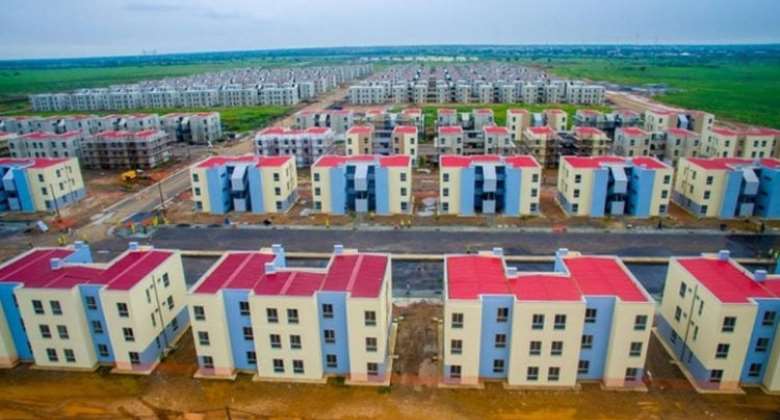 The government through the Minister for Works and Housing, Mr Asenso Boakye, gave a hint of government's intention to sell the Saglemi Affordable Housing Project to a private developer.

This has since generated debate with the National Democratic Congress (NDC) describing the move as wasteful. The Member of Parliament for Awutu Senya West Constituency, Mrs Gizella Tetteh-Agbotui, who is an architect, described the suspension of the project as heartbreaking.

Following the announcement by the sector minister, the NDC has resorted to courting public support to kick against the decision to sell this project. To this end, they have argued that the government has deliberately decided to talk down the scheme to create room for them to sell it to cronies of government functionaries. They have also cautioned real estate developers against buying it, threatening to reverse the decision should they take over the administration of the country in 2025.

Mrs Gizella Tetteh-Agbotui, who views the suspension of the project by the current government as heartbreaking, thinks the neglect of the housing scheme is a waste of tax payers’ monies and has therefore appealed to the public to question the government.

Interestingly, however, the NDC MPs who bussed themselves to the site to hold a press conference on the issue, failed to speak to the implicating allegations Mr Asenso Boakye levelled against them as the initiators of the project, for which reason the government has been compelled to sell it.

The NDC MPs' call on citizens to question government's intention to sell the project cannot be trivialized. Nonetheless, it is equally important for the poor tax payers to find out why 98% of the allotted funds have been sunk into the housing scheme and yet there is so much work left to be done. It is also imperative for the NDC to either confirm or deny the damning allegations levelled against them with regard to how they executed this project.

It will also be unfair to question the government for deciding to sell the Saglemi Affordable Housing Project to a private developer without assessing the reasons the government has given for the decision.

According to Mr Asenso Boakye, 98% of the funds that was earmarked for the project has been spent. However, there is so much work to be done.

Moreover, the original 5000 housing units for which USD200 Million was allocated for was also reviewed to 1506 by the erstwhile John Mahama NDC-led government. Despite reducing the housing units from 5000 to 1506, over USD195 Million has been spent on it with much work still left undone as reported by the Minister for Works and Housing.

The minister also noted that an assessment report on the project by Ghana Institute of Surveyors has revealed an extra amount of barely USD65 Millions is needed to complete the 1506 housing units that have already consumed 98% of the monies initially allotted for the original 5000 units.

In sum, the previous erstwhile Mahama NDC led government blew the monies meant for this project without commensurable work to show. It is against this backdrop that the government has thought it wise to sell the project to avoid further waste of tax payers’ monies. The project is therefore, being sold to prevent it from further deterioration.

It is also important to note that the government has initiated court action against the then Minister for Works and Housing, Mr Collins Dauda, for the discrepancies identified with the execution of the project. Under this circumstance, it will not be reasonable for the government to sink more monies into the project without seeking for answers to how the previous funds was used.

On this note, it will be fair for the NDC to confirm or deny the incongruities associated with how they executed the Saglemi Housing Project before confusing the public with cheap politics and inciting them against the government.

In fact, the NDC MPs will do the citizens good if they refute the allegations the NPP have levelled against them. They should let Ghanaians know how much monies they left behind for the remaining work. This is what will justify their position of calling on Ghanaians to resist the government on this matter.

However, if they indeed blew 98% of the allotted funds as alleged by Mr Boakye without commensurable work to show, they should respect the intelligence of the citizens for once and shut up for the government to salvage the buildings from further deteriorating.

The Author is a political activist and a social commentator.