DR Congo to hold next presidential polls in December 2023 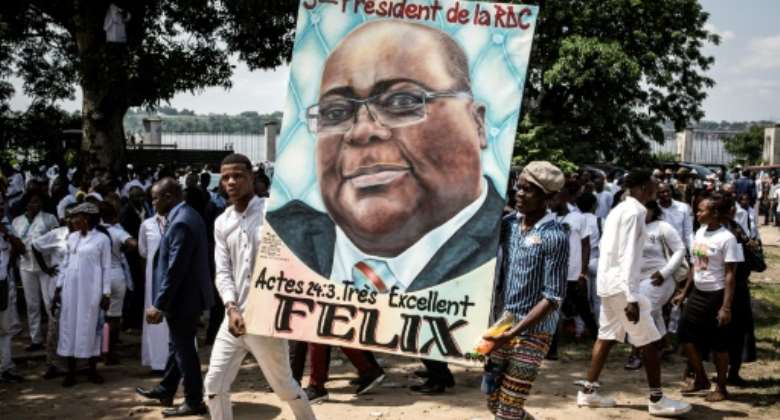 President Felix Tshisekedi came to power in the Democratic Republic of Congo in January 2019. By John WESSELS (AFP)

The Democratic Republic of Congo will hold its next presidential polls on December 20, 2023, the country's electoral commission said Saturday.

The announcement comes as rebels have advanced in the restive east of the African country, displacing tens of thousands of people from their homes.

The electoral commission's president said "persisting insecurity in some parts of the territory" would be a challenge to holding a "free, democratic and transparent" vote.

In the DRC, the presidential poll is held at the same time as parliamentary, provincial and local elections.

The president-elect would then take office in January 2024.

It was the country's first peaceful handover of power.

He has already announced his intention to run for a second term, despite clashes over the results.

Supporters of Martin Fayulu disputed the results of the 2018 presidential polls. By John WESSELS (AFP)

Other possible contenders could include Martin Fayulu, the runner-up in the 2018 presidential polls who claims he was deprived of a victory in the vote.

There has been no immediate announcement from former prime minister, Adolphe Muzito, and the ex-governor of the southern region of Katanga, Moise Katumbi, who are also seen as potential candidates.

Augustin Matata Ponyo, another ex-premier, has said he will run.

Ponyo last year went on trial on charges he embezzled public funds, but the constitutional court ruled it did not have the authority to judge him.

The court's line-up has however now changed, and has said it could try him.

Tshisekedi's inauguration ceremony in 2019 capped more than two years of turmoil sparked by Kabila's refusal to step down when he reached the constitutional limit on his term in office.

Before Tshisekedi, Joseph Kabila was in power for 18 years. By TONY KARUMBA (AFP)

The last two presidential elections before that, in 2006 and 2011 -- both won by Kabila -- were marred by bloodshed and dozens died in a crackdown on protests after he chose to remain in office in 2016.

A country the size of continental western Europe, the former Belgian colony lived through two regional wars in 1996-97 and 1998-2003.

The March 23 (M23) rebel group took up arms in late 2021 after years of dormancy, claiming the DRC had failed to honour a pledge to integrate its fighters into the army, among other grievances.

After four months of relative calm, the conflict erupted again on October 20 and the rebels made a push towards Goma.

The fighting has dashed relations between the DRC and Rwanda, with Kinshasa accusing its smaller neighbour of backing the M23 -- something UN experts and US officials have also said. Kigali denies the charges.

Violence in eastern DRC has displaced tens of thousands of people. By ALEXIS HUGUET (AFP)

Tshisekedi and Rwandan Foreign Minister Vincent Biruta met in Angola on Wednesday, agreeing to a cessation of hostilities in eastern DRC from Friday evening.

M23 rebels were to withdraw from "occupied zones", failing which an East African regional force would intervene.

But the rebels, a largely Congolese Tutsi militia, said Thursday the ceasefire "doesn't really concern us", and called for "direct dialogue" with DRC's government.

The frontlines seemed quiet on Saturday morning, but residents in the eastern DRC remained sceptical that it would hold.