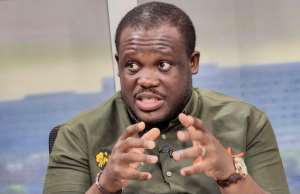 Samuel Nartey George, Member of Parliament for Ningo Prampram has no hope in the 2023 budget read in Parliament by Finance Minister, Mr. Ken Ofori-Atta.

He said the budget statement is empty with nothing to restore the country from the current economic crisis.

In a tweet on Thursday, November 24, the vocal legislator subtly wrote in twi, "Budget no, sunsum nni mu," to wit, "there is no spirit in the budget."

Among several measures, announced in the “Nkabom” (unity) budget, Minister of Finance, Mr. Ken Ofori-Atta recounted some measures taken by government to save Small and Medium Enterprises (SMEs).

He indicated that at the time these businesses were facing huge crises due to the country’s current economic predicament, a loan of GH245,322,000.00 was disbursed to them.

The move, according to the Finance Minister, preserved a total of 1,000 jobs in the country.

Presenting the 2023 budget statement and economic policy plan in Parliament House, Accra, on Thursday, November 24, Mr. Ofori-Atta stated that the Development Bank of Ghana (DBG) has joined hands with the Private Financial Initiative (PFI) to reduce the lengthy process involved in lending to SMEs.

“DBG has partnered with a PFI to build a digital lending platform to shorten the processing time for lending to SMEs and increase its ability to reach a lot more businesses across the country,” he said.

On the way forward, the Minister said, “To support SMEs with equity funding, DBG is also in the process of establishing a private equity fund with an initial capitalization of about GH¢400m (US$30m).”

Also, some of the most contentious measures is the increase in the country’s value-added tax (VAT) by 2.5 per cent, reduction of the electronic transaction levy (E-Levy) from 1.5 percent to 1 per cent and closure of public sector employment.