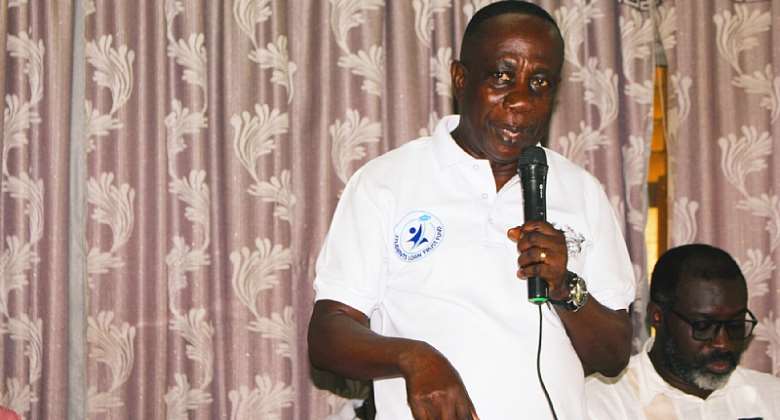 Some residents of the Obuasi Municipality have heaped praises on government for introducing the 'No Guarantor' Student Loan Policy.

This was after the management of the Students Loan Trust Fund (SLTF) led by its Chief Executive Officer Nana Kwaku Agyei Yeboah met with traders, drivers and market women at the Obuasi Central Market to sensitise them on how to access the fund.

In a series of publicity drives which started on Tuesday, 222nd November, 2022 in Obuasi, managers of the fund earlier met with artisans and staff of the Obuasi Municipal Assembly to also brief them on the details of the SLTF.

Led by Yaa Achiaa, a Tomato seller at the Obuasi Central Market, she said hitherto, they had challenges accessing student loans due to difficulties in finding guarantors. She said government since coming to office in 2017 has made education accessible with the introduction of the Free Senior High School policy and the 'No Guarantor ' loan system.

"The Government has relieved us of the burden of funding education in the country. Now, as parents, we don't have to go through the stress of looking for money to pay our wards' school fees. This Government is a blessing," she added.

The Vice President, Dr. Mahamudu Bawumia launched the No Guarantor Student Loan Policy at the Kwame Nkrumah University of Science and Technology (KNUST) in Kumasi, on Wednesday June 8, 2022.

The No Guarantor Student Loan Policy, a promise by the Akufo-Addo government prior to the 2020 elections, is to make tertiary education accessible to Ghanaian youth, especially graduates from the highly subscribed Free Senior High School policy.

With the No Guarantor Student Loan Policy, the cumbersome and restrictive policy of students providing three SSNIT contributors as guarantors before they could access student loans for tertiary education is now a thing of the past.

The Chief Executive officer of the Student Loan Trust Fund Nana Kwaku Agyei Yeboah in an interaction with the media after the sensitization sessions in Obuasi said the 'No Guarantor ' loan scheme is a prove of Government's commitment to enhance access to education in the country.

He appealed to Ghanaians to take full advantage of the ease with which one can access the loan, to acquire it to cushion their children's education.

The Municipal Chief Executive for Obuasi Honorable Elijah Adansi-Bonah lauded the Government for introducing the Policy. He said the Government despite the economic challenges facing the country, has not relented in performing its responsibilities of improving the living standards of Ghanaians.

He appealed to residents of Obuasi to rally behind the Government to deliver on its promises.