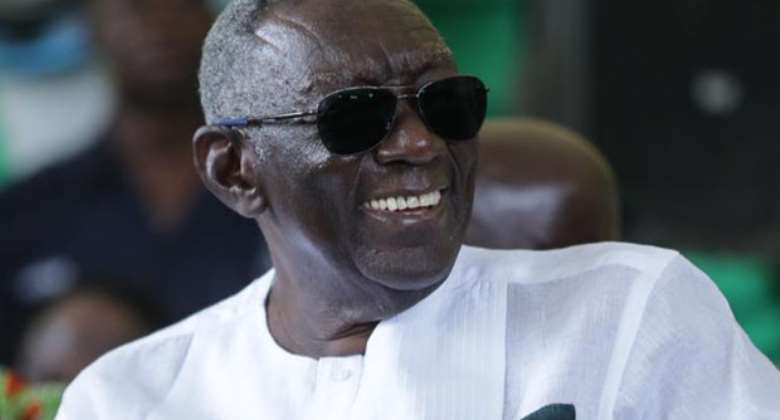 THERE IS a word which those of us who live in this part of the world play with and do not care a dime about its relevance. In fact, we seem to take this word for granted. The word is LEGEND. We are good at writing long eulogies, singing sorrowful dirges and discharging 21 gun salutes when great men die but we don't celebrate our heroes while they are alive. Meanwhile, we have these heroes who are alive and need to be celebrated. One of such living legends is Mr. John Agyekum Kufuor, a former President of Ghana.

When you know about a living legend, you have a place in your memory and conversation that can be triggered and recalled at any moment in time. Stories of living legends and their impact to mankind are felt by generations each passing day. We usually say you cannot become a legend before you die. That is not true. We have living legends. They are those who are famous while still alive for doing something extremely well. Mr. Agyekum Kufuor travelled the high road of humility and rendered service to mankind in Ghana's history and never bothered on any heavy traffic. He showed us what it meant to be a President who served with integrity, dignity, led and acted with love for his countrymen, irrespective of one's political affiliation. Throughout his Presidency and even in retirement, he believes a gentleman always does the kindest thing. He believes people are basically good and have the right to be free. Anyone who ever met Mr. Kufuor will remember he is the same sincere, honest and upright fellow today. His conviction is always politely stated, affably argued and he is honest, firm and straight like the columns of St. Peter's Cathedral in Rome. He believes in the power of truth in the conduct of the nation's affairs. He cleverly navigated the dangerous minefield of Ghana's politics of insults and vilifications and came out strong, unblemished and unscathed. He is a gentleman's gentleman. Don't say I am prone to panegyric. It is the gospel truth which must be told for historians to take note and the younger generation to learn something from the narrations.

As the man showed us what a President should be, he also showed us what a man can be. He carried himself even in the most powerful office as the Executive President of Ghana with the decency and attention to small kindness that also defines good life. He is never known to slight or embarrass others. Engage him in a conversation and you will find yourself never wanting to leave him. At his age, he still remembers anyone that he has ever met during his campaign to become the President of Ghana and after he has become the President of Ghana. He sees you and he will quickly mention your name and where he met you. He is an ardent reader of this column and my name to him has become synonymous to DAILY GUIDE. Where I come from, our elders refer to such people with perfect retentive memory and high intelligent quotient as the reincarnation of our great, great grandfathers. They are adored and revered.

During my interaction with this living legend recently, I observed that he values character over pedigree and he is no cynic. He told me public service is noble and necessary and that one can serve with integrity. If you can't afford continuous laughter, don't worry yourself to engage the man in conversation because he places great value on good jokes and humor. And his laughter is infectious, so infectious that if you don't take care you may wet your pants. At a point in time during our conversation, when I tried to recount to him his numerous achievements, he interjected and said he is also a Prison Graduate. (PG). He said he spent sometime in the Ussher Fort Prison when Professor Busia was overthrown by General Acheampong, hence his proud qualification as a Prison Graduate. He said at a very young age of thirty years, he was appointed as the Deputy Foreign Minister in the Progress Party administration of Professor Busia. When he was the President and supporters of the NPP started complaining that he was too weak in dealing with the NDC officials who were accused of corruption, the man jokingly told them that people don't get drowned in hot waters but they do in cold ones. Before we could say Jack Robin, some former ministers of the NDC found themselves in prison for engaging in corrupt practices. Kwame Pepra, Ibrahim Adam, Sipa-Yankey, the late Victor Selormey and others spent sometime in the Nsawam Maximum Prison. These people, except the late Victor Selormey are still walking with the tag of Jail Bird firmly fixed on their broad chests. They cannot be referred to as Prison Graduates because they were criminals who dipped their hands in national coffers. Even the great Tsatsu Tsikata had some time in Nsawam Maximum Prison. Unlike Rawlings who exhibited revolutionary power with the barrel of the gun, Mr. Kufuor was interested in court room justice. You don't screw with a Gentle Giant!

Meanwhile, when the NDC later came to power, they hauled more than ten former ministers and functionaries of the Kufuor regime to court for allegedly engaging in corrupt practices but none of them went to jail. They were all acquitted and discharged by courts of competent jurisdiction. Do you remember the late Mr. Rawlings had told President Kufuor to expand the Nsawam Maximum Prison because many of his ministers will end up in that facility? Kufuor did not treat his ministers and functionaries with kid-gloves. He demanded nothing but the best from them. His services were for God and country. Simplista!

The story is told of an evangelical minister and a politician who arrived together at heaven's gate. They met bearded St. Peter at the gate who took them through all the formalities and later took them to where they will stay in Heaven. St. Peter, showed the Priest a single room with a bed, a table and a chair and asked him to stay there as his new abode. St. Peter then asked the politician to follow him and when they reached a huge and fine mansion with well trimmed lawns and servants, he told the politician that, that was his new abode. Surprised, the politician asked St, Peter why a whole man of God should be given a single room and he, as a common politician, who seldom attended church, would be given such a nice mansion. Listen to St, Peter: “You don't understand how things are done here. We have got thousands and thousands of priests here in Heaven but you are the only politician we admit here.” Mr. John Agyekum Kufuor will be admitted in Heaven and treated like the way St. Peter treated the politician because of his good works to mankind. How I wish I will become one of the servants to polish his shoes in heaven!!

When one day, history book is written, the writers will say Mr. Kufuor was a great President of Ghana, a Diplomat of unmatched skill, a Commander-in-Chief who was loved by his soldiers and above all, a gentleman who performed his duties of his office with dignity, hard work and honour. You know what? I can't wait to read Mr. Kufuor's Memoirs.