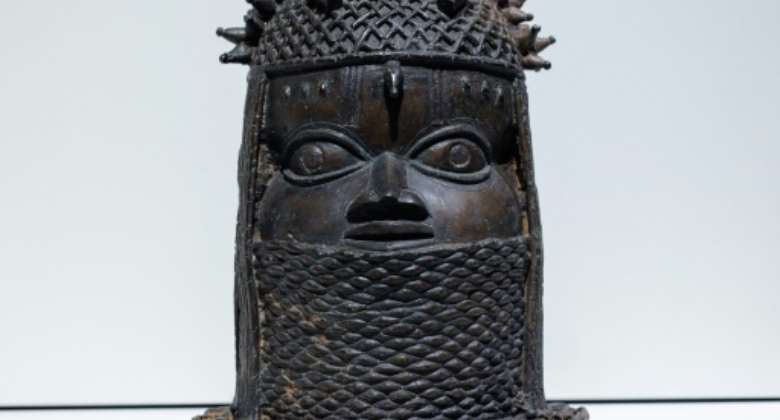 Stolen during the colonial era, dozens of Benin bronzes once decorated the royal palace of the Kingdom of Benin.. By JENS SCHLUETER (AFP)

Nigeria's famed Benin bronzes -- artefacts stolen during British colonial rule and scattered across the globe -- have a new online archive that aims to become a digital record of the treasures.

Thousands of 16th to 18th century metal plaques, sculptures and objects were looted from the ancient Kingdom of Benin and ended up in museums and with art collectors across the US and Europe. Many experts hail them as the zenith of African art.

As Nigeria negotiates their return, "Digital Benin" (https://digitalbenin.org/) provides a centralised hub of images and descriptions of more than 5,000 artefacts held in 131 institutions around the world.

"It is unique, new possibility to see all the objects together and to compare them," Barbara Plankensteiner, director of Germany's MARKK museum and one of the project's founders, told AFP.

"It is really helpful for research for Nigerian scholars to be able to access knowledge they had not been able to before."

The project, which began planning and research two years ago, was launched at an official event at the weekend in Benin City, in southern Nigeria's Edo State, the heart of the former Benin Kingdom.

The platform contains a vast collection of images and details of artefacts categorised by the type of object from figureheads to shields and ceremonial roosters.

It details all the institutions where artefacts are held, from the British Museum with more than 900 objects to places like Toledo Museum of Art which has just one commemorative Queen Mother head statue.

The Smithsonian's National Museum of African Art is among those returning bronzes to Nigeria.. By Handout (Smithsonian Institution/AFP)

Readers can also scroll through the story of the Benin Kingdom, its royalty, its chiefs and festivals, with a special section dedicated to oral history.

The project comes online as international momentum grows for the restoration of African artefacts from former colonial powers Britain, France, Germany and Belgium.

Nigeria's neighbour Benin earlier this year inaugurated an exhibition of artworks and treasures returned by France after two years of negotiations.

Those 26 pieces were stolen in 1892 by French colonial forces from the capital of the former Kingdom of Dahomey.

Germany is in the process of returning hundreds of Benin Bronze artefacts to Nigeria, where a new museum is being built in Benin City to house artefacts.

Many of the artefacts were originally taken in 1897, when a British military expedition attacked and destroyed Benin City, looting thousands of metal and ivory sculptures and carvings.

"These are our properties," Edo State Governor Godwin Obaseki said at the event to open the platform. "They were taken from us and they should be returned to us."

The Kingdom of Benin, which despite its name was located in what is now southwestern NIgeria, traces its roots back to the first century BC.

It expanded through military conquest and commerce, which with the arrival of Europeans in the 16th century developed into trade in slaves, ivory and spices.