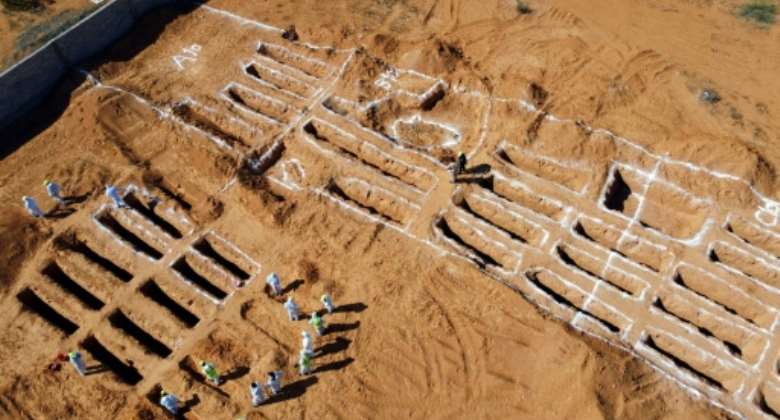 The International Criminal Court's chief prosecutor said Wednesday he had urged eastern Libyan military chief Khalifa Haftar to "prevent" crimes by his troops, as investigations into their actions continue.

Karim Khan, the first ICC prosecutor to visit the war-torn country in a decade, arrived in Libya on Saturday.

The North African nation descended into chaos following the NATO-backed revolt that brought down dictator Moamer Kadhafi's regime in 2011 -- with rival administrations based in east and west and a myriad of militias scattered across the country.

Khan visited the town of Tarhuna, where mass graves were discovered in 2020 after Haftar's troops withdrew following an abortive attempt to seize the capital Tripoli, and met Haftar on Tuesday.

"I made it clear that we had received evidence and information regarding allegations that were crimes committed by LNA troops," he told the United Nations Security Council on Wednesday, referring to Haftar's self-styled Libyan National Army.

"I said that those were and are being investigated, (and) that military commanders must prevent, must repress and must punish crimes when they emerge."

One such group was the Kaniyat, which seized Tarhuna in 2015 and instigated a rein of terror.

The Kaniyat allied with Haftar during his year-long offensive on Tripoli, but after he retreated in mid-2020, residents began discovering bodies.

More than 270 bodies have so far been found, and Khan said victims wanted the truth.

"They want their voices to be heard, and they want allegations to be judicially determined by independent and impartial judges," he said.

Before taking over as the ICC's lead prosecutor, Karim Khan defended Seif al-Islam Kadhafi, son of slain dictator Moamer Kadhafi, whose arrest the ICC is seeking for "crimes against humanity".