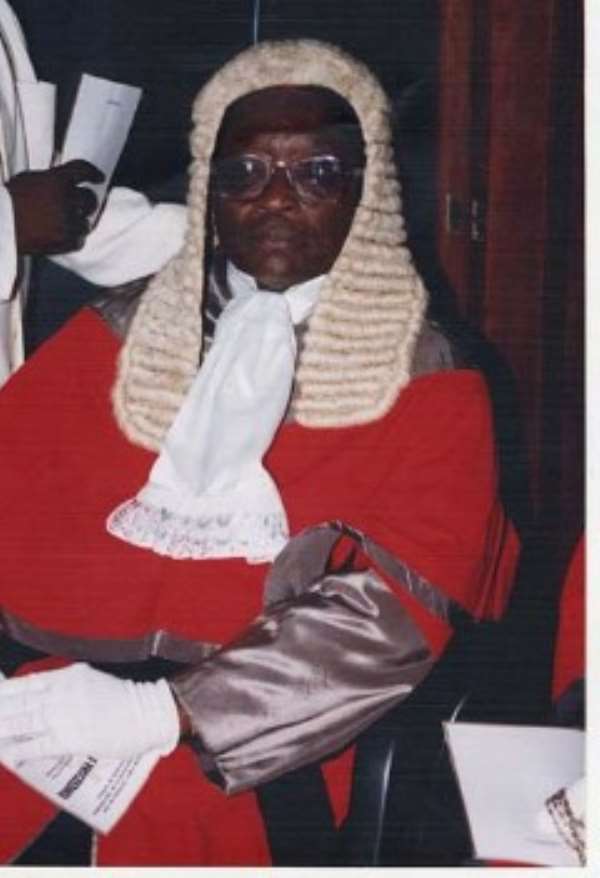 A retired Supreme Court judge, Justice George Lamptey, says the President is not obliged to make public the report of any committee or commission of enquiry that he sets up.

Similarly, the Constitution does not support suggestions that the President should act on reports of committees set up by the ministries, he said.

Justice Lamptey was addressing a seminar on Continuous Professional Development for some professional bodies in Accra on Thursday. It was on the theme, 'Promoting the Public Interest - The Role of the Lawyer'.

He said that a commission or committee of inquiry set up by the President was only expected to present its report to the President who would in turn, issue a white paper on it. "These reports are not for public consumption and so he is not expected to hold a press conference to announce the recommendations to the public."

Justice Lamptey also spoke on vetting of ministers. He said rather than subjecting government appointees to the rigours of parliamentary vetting, Ghanaians should perhaps be looking at amending the Constitution to make it possible for the President's appointees not to go through such procedures.

"He pointed out that after the President appoints the ministers, Parliament spends about two months selecting and dropping people and, therefore, delaying the actual time needed to commence serious government business."

Justice Lamptey also described as unjustifiable, criticisms that the President travels too much.

He noted that Ghana's constitution has made the President assume the roles of both Head of State and Head of Government, as well as the Commander in Chief of the Ghana Armed Forces.

Thus, given the numerous functions of the President, he said, it was to be expected that the President will perform such important roles by visiting other countries for the mutual benefit of all Ghanaians.

"When do we say the President is performing his duties as Head of State and when do we see him performing the role of Head of Government?" he questioned.

The chairman for the occasion, Justice V.C.R.A.C. Crabbe, also a retired Supreme Court judge, appealed to professionals in the country to come out of their shells and comment on issues of national interest.

"There are too many 'experts' on every issue in Ghana, but the real experts who should set the records straight keep quiet," he complained.

The seminar was organized by the Association of Certified Accountants and other accounting bodies. Representatives from the legal, medical, accounting and engineering fields presented papers on topical issues.