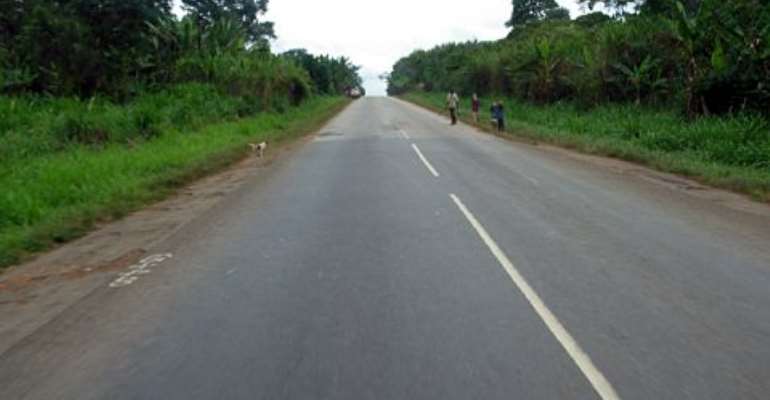 Ghana Highways Authority and Sonitra Construction Ltd. are in a state of limbo over the handing over of ¢132 billion Apedwa-Bunso section of Accra-Kumasi road to the government due to shoddy works. The Sun's investigation was confirmed by the Managing Director of Sonitra Construction Ltd., Mr. J. C. Kalfa...
..that one year after the construction of the Apedwa-Bunso section of Accra-Kumasi road, it has developed huge defects as a result of what experts described as shoddy work. The deplorable state of the road that was supposed to last between 15 to 20 years has made it impossible for the contractor to hand it over to the government.

As Ghana Highways Authority (GHA) and the contractor is locked-up over the handing over, and what might have gone wrong, experts who the Sun spoke to called on the government to fire the Chief Executive of GHA and his top officials who supervised the construction of the multi -billion to serve as deterrent to others.

In calling for the dismissal of the top officials of GHA, road construction experts noted that even though there was GHA official together with a consultant supervising Sonitra, they could not detect the deplorable and shoddy works that was going on until the resigned Minister of Roads and Transport, Dr. Richard Anane and his team went on inspection before their attention was drawn that the road has recorded huge defects.

"For the Chief Executive Officer of GHA to endorse certificates running into billions for payment to the contractor without taking into account the state of the road under construction or drew government attention is an act of dishonesty,” an expert who pleaded anonymity told The Sun.