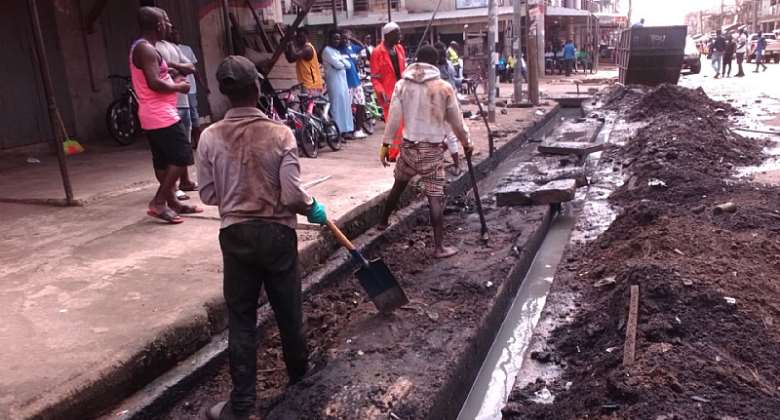 Store owners operating within the Central Business District (CBD) of the Kumasi Metropolis, have been warned to observe environmental sanitation by-laws.

“Any recalcitrant trader who decides to take the law into his or her own hands, will be dealt with,” Mr Samuel Pyne, the Mayor, stated, in a speech read on his behalf, at a clean-up exercise, at Alabar, in Kumasi.

The exercise was organised jointly by the Metropolitan Assembly and Kumawuman Rural Bank, as part of activities marking the 40th anniversary celebration of the financial institution.

The Kumasi CBD, one of the busiest commercial areas in the West African sub-region, is beset with a mounting garbage at many trading places – a challenge the Assembly is desperately trying to address.

At Alabar, a popular destination for Nigerien, Malian, Burkinabe and other traders from the sub-Region, the upsurge of trading activities, particularly on the pavements, have affected the drainage system as the people dump refuse into the open culverts.

Some of the store owners have also erected illegal structures on the drainage system, and in some cases, filled the culverts with sand in order to create places for their merchandise.

The Ghana News Agency (GNA), in a sideline interview with the metropolitan authorities, gathered that Alabar was fast establishing itself as one of the flood-prone areas at the CBD.

This is emanating from the excessive water gathered from the upper-lying culverts during rainfall, which find it difficult flowing freely downstream due to the silt.

Mr Pyne said the Metropolitan Assembly valued the contribution of corporate organisations in the campaign to rid Ghana's second-largest city of filth.

He lauded the Kumawuman Rural Bank for being responsive to its corporate social responsibilities, saying ensuring a clean environment was a shared duty.

Mr Kwadwo Akuamoah Boateng, the Metropolitan Coordinating Director, who represented the Mayor, expressed shock at the impunity with which some traders and residents of Alabar had virtually turned the drainage system into a refuse dump.

“We will not allow these bad practices to go on,” he told the GNA.

Mr Charles Kwadwo Nimoh, a Board Member, Kumawuman Rural Bank, and Committee Chairman for the 40th anniversary celebration, rallied other financial institutions to join in the campaign to restore Kumasi to its former status as the 'Garden City of West Africa'.

Mrs Lydia Owusu-Afriyie, a Board Member, Kumawuman Rural Bank, said humanity thrived on the environment, therefore, the citizenry ought to respect nature and work towards protecting it.