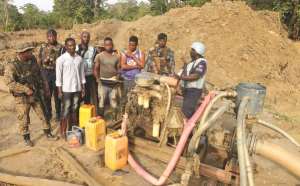 If you are amiably listening to amateur radio broadcasts and a call like the one above interrupts the music or news, it means there is distress on board the aircraft that has identified itself as “Ghana 001”!

Such a call is made when the aircraft is close to running out of fuel; or has lost an engine due to malfunctioning; or because its instruments have somehow ceased to function accurately.

At such a moment, airport control officials are immediately put on the alert and they co-operate to locate the aircraft, divert any other aircraft that might be in its vicinity, and try to guide it to a safe landing on a runway that is fully prepared to carry out the emergency procedures routinely put in place whenever an aircraft is in danger of attempting to make a “crash landing” in their airspace.

Readers, I believe the nation of Ghana is making such a distress call right now. What is the nature of our emergency?

We face an existential threat caused by the seeming impossibility of ending galamsey and its nefarious effects on our state machinery.

Galamsey is threatening to make us run out of water. It is also tempting food and cocoa growers to turn their food and cocoa farms into galamsey grounds.

Galamsey is also posing a challenge to our social structure, by creating a cultural threat to our society. Where we all used to accept our rights and duties, with regard to land ownership and land use, we are now faced with a mighty confusion that makes us bicker over the control of mining activities in our communities, at the local level.

Can a piece of land that has been traditionally used for producing food (for instance) be transformed into a mine-ground, because the owner of the land believes that his economic interests will be better served if he allows the land to be turned into a galamsey site?

Dothe proceeds from the land, when it assumes in its new usage, accrue to the person who originally inherited it from his ancestors (who were allocated the land, by a traditional process) to be used only for food or cocoa production? Does he share the proceeds of the galamsey operation with the chief of his locality or not?

Is the land being used for gold-mining because the galamseyer has taken the precaution of obtaining a LICENCE from the Lands Commission for that purpose? Doesn’t the Constitution contain an article that provides that no land can be used to mine minerals UNLESS THE LICENCE FOR DOING SO HAS BEEN RATIFIED BY PARLIAMENT? In case our MPs have forgotten that provision, I remind them of it:

1. Any transaction, contract or undertaking involving the grant of a right orconcession by or on behalf of any person, including the Government of Ghana, toany other person or body of persons…. for the exploitation of1. Any mineral, water or other natural resource of Ghana….SHALL BE SUBJECT TO RATIFICATION by Parliament.

2. Parliament may, by resolution supported by the votes of not less than two-thirdsof all the members of Parliament, exempt from the provisions of clause (1) of this Article, any particular class of transactions, contracts or undertakings.

2. Notwithstanding article 268 of this Constitution, Parliament may, upon the recommendation of any of the Commissions established by virtue of clause (1) of this Article, and UPON SUCH CONDITIONS AS PARLIAMENTR MAY PRESCRIBE, authorise any other agency of government to approve the grant of rights, concessions orcontracts in respect of the exploitation of any mineral, water or other natural resource of Ghana.” UNQUOTE

I ask our Members of Parliament: please, have you made any authorisations in respect of this Article? If so, when? If not, have you bothered to summon the Minerals Commission (for instance) to come and explain to you, the way and manner in which (for instance) a gentleman popularly known as “Chairman Wontumi” is reported to have obtained a licence to carry out galamsey activities in a forest reserve, until2030 or even beyond? Did his original licence come before you for ratification (under Article 268) and if it was granted without being brought to Parliament for ratification, does it not mean that whoever granted the licence had, in fact, USURPED the powers of Parliament? Is that not a criminal offence?If it is, are you interested in prosecuting the offence?

Other aspects of the galamsey problem that puzzle me, and which can, perhaps, only be unravelled by a Commission of Enquiry (appointed by the President on an emergency basis) are these:

When an aircraft is in distress and sends a “Mayday” signal to the airwaves, nobody pauses to enquire whether that on board are businessmen, politicians, or footballers. What everyone does is to rally round and do their bit – according to their training – to try and save the “souls on board” (irrespective of the nationality of the trapped passengers.)

I cry “Mayday!” on behalf of myself and my generation; my children and their age-groups; and my grand-children and their mates. I assure those in a position to take URGENT ACTION to ensure the survival of our water bodies, our forests and our food farms and our cocoa industry, that if they fail to hear the nation’s cry of “Mayday!”, their own children and their children, will (excuse the language) defecate on their graves –after they have chopped the dirty galamsey money and gone.

2023 budget: Expenditure cuts are just a recycle of broken p...
12 minutes ago