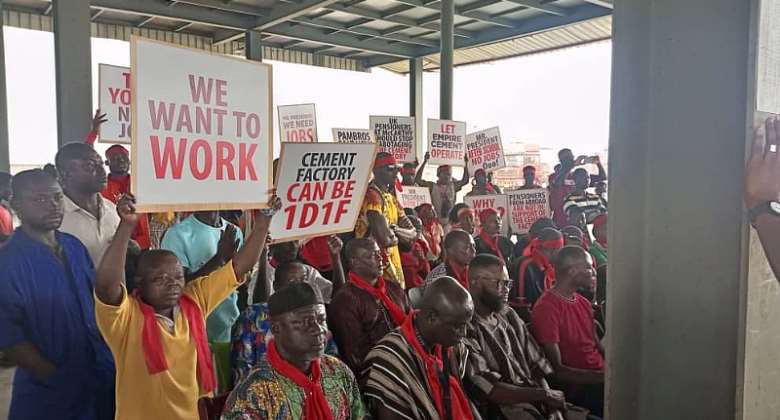 The Weija-Gbawe Chiefs, Assembly Members and residents have appealed to President Akufo-Addo to ensure that the necessary business operating licenses are granted to the Empire Cement Factory in the Weija-Gbawe Municipality of the Greater Accra Ghana.

Speaking at a press conference, Mr. Kwaku Danso, President of the Residents Association in South West McCarthy Hill, underscored the need for the President's intervention.

Speaking to the media in the presence of the chiefs and residents, Mr. Danso said they were of the firm belief that there are clear evidences that some self-seeking individuals in the area are sabotaging the factory.

According to the Assembly Member of New Gbawe, Hon. Andrew Oppong Amoako, the management of the company in their consultation had told them it has finished the construction of the factory for the past two years and awaiting the permit to start full operations.

Nii Laryea, the Jaasefio of Gbawe, minced no words in calling for a swift action from government.

He said the teeming youth are at their wits end wondering why such an employment opportunity should be left to go waste.

The traditional authorities, residents and the youth clad in red bands and holding placards, appealed to the government and Weija-Gbawe Municipal Chief Executive (MCE), Mr. Patrick Kwasi Brako Kumor to commission the factory.

They stated that the operation of the factory would directly and indirectly employ thirteen thousand (13,000) workers.

Empire Cement Factory is under the One District One Factory (1D1F) flagship programme of the government.