Though the last to join, he was the one to end; Nkrumah the cradle of African independence 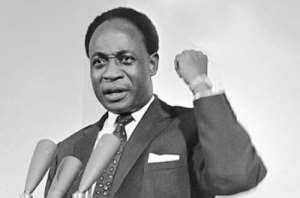 The first and only Leader of Government Business in the history of Ghana, then Gold Coast, and additionally, Prime Minister and the first Republican President, Dr. Kwame Nkrumah’s efforts in Ghana’s independence struggle are highly commendable and incomparable.

His uniqueness in making sure his people are being given back their stolen freedom and identity, won him the powerful indigenous title, Osagyefo, meaning "the saviour for many."

Many, before the coming or the emergence of Osagyefo Dr. Kwame Nkrumah, such as John Mensah Sarbah, J.E. Cassely, James Emman Kwegyir Aggrey, and members of the Big Six, did undoubtedly well in the struggle for the nation’s independence.

But as the saying goes in the Akan local dialect, "Paulo aama nt3m wab3sene adikanfo,"(though Paul came in late, his efforts outweigh the beginners), is the true posture of the most energetic ever pan-Africanist to grace the continent at that vital point which made it achievable.

At that time, Faith and Destiny played a very key role in the return of the then-young scholar from the UK to join the United Gold Coast Convention (UGCC) at the time.

The party’s Secretary General position, as history has it, was to be held by Dr. Arko Adjei, a member of the founding members of the UGCC who happened to be a business mogul at the time and, due to how demanding the position seemed to him, recommended Osagyefo to the party’s leadership.

On December 10, 1947, the energetic, vibrant, charismatic, radical, and visionary 39-year-old Nkrumah returned to the country to take up the position of the first established political party’s chief scribe.

Having the people, especially the masses’ interest at heart, and noticing that the UGCC is towing the elite trend, leaving the majority of the populace behind, and most especially seeing their ideology and slogan weren't in good shape for people craving for independence, he tried to make a change.

In his position as the General Secretary, he suggested the party change its slogan from "Self Government within the shortest possible time" to "Self Government now," which was profusely rejected by the leaders.

After the 1948 riots, Dr. Nkrumah was blamed for being the one who incited the youths to take action.

This even made them exclude him from the Coussey committee set up by the British government to look into the causes of the riots, including all the members of the party except him.

Dr. Nkrumah left the party after being demoted from General Secretary to Treasurer, most likely due to their fear of him constantly criticizing their proposed policies.

On June 12, 1949, at a massive rally at Accra Arena attended by approximately 60,000 supporters, Nkrumah announced the formation of a new party, the Convention People's Party, on behalf of the Committee on Youth Organization (CYO) (CPP).

According to Nkrumah, the CPP's primary goal was to "fight relentlessly, by all constitutional means, for the achievement of full self-government now for the chiefs and people of the Gold Coast."

The radical leader, in strong collaboration with other visionary Gold-Coast youths like Krobo Edusei, Kojo Botsio, Komla Agbeli Gbedemah and others, worked in line with all.

Every section of the population in society was welcomed without being conservative like the UGCC to achieve their set goal, which is self-government after a series of election victories.

After the 1951 general elections, Nkrumah became the Leader of Government Business after his party's victory, even when in prison.

He later became the first Prime Minister till the last election in 1956, where he won and led the country to declare her independence at the Polo grounds, Accra, on the evening of Wednesday, March 6th, 1957.

And in his speech at the independence declaration, he said, "The African people are capable of managing their own affairs, and Ghana, our beloved country, is free forever."

His words were truly not rhetoric, as his posture alone, together with his guidelines, helped many colonized African countries taste their share of independence.

In this regard, I will acknowledge the fact that Ghana’s independence was never fought by Osagyefo Dr. Kwame Nkrumah alone as even the country's name was suggested by Joseph Boakye Dankwah, a member of the UGCC, but his significant impact was what granted it peacefully and the way it did.

That said, the significant impact he had on African liberation, undoubtedly, earned him the cradle of African independence.