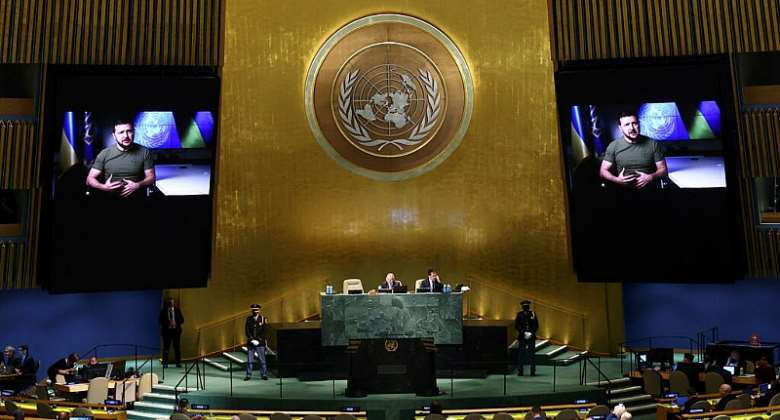 In the wake of an appeal to the United Nations by Ukrainian President Volodymyr Zelensky for Moscow to be punished for its invasion, Russian Foreign Minister Sergei Lavrov will on Thursday face top Western diplomats, including US Secretary of State, Antony Blinken, in a special meeting convened by the UN Security Council at the request of France.

In his address to the UN General Assembly, Ukrainian President Volodymyr Zelensky called no fewer than 15 times for the punishment of Russia. He received a standing ovation from world leaders assembled in New York.

Zelensky called for a special tribunal to hold Russia accountable, saying it would be a "signal to all would-be aggressors".

He also demanded a compensation fund, saying Russia "should pay for this war with its own assets".

His address came hours after Russian President Vladimir Putin mobilised reservists and made a veiled threat to use nuclear weapons, signs that he is in no rush to end the war.

Zelensky indicated that he saw no point in immediate peace talks, saying Russia used diplomacy only to buy time on the battlefield.

"Russia is afraid of real negotiations and does not want to fulfil any fair international obligations. It lies to everyone -- as is typical for aggressors, for terrorists."

On the sidelines of the UN gathering, French President Emmanuel Macron urged the world to "put maximum pressure" on Russian leader Vladimir Putin, while German Chancellor Olaf Schölz denounced the call-up of Russian army reserves announced by Moscow as "an act of desperation".

British Prime Minister Liz Truss -- in her first trip since succeeding Boris Johnson -- vowed before the UN to keep up "our military support to Ukraine for as long as it takes".

Top European Union diplomats held an emergency meeting late Wednesday on the UN sidelines to discuss the extension of sanctions against Russia.

"We will study, we will adopt new restrictive measures, both personal and sectoral," EU foreign policy chief Josep Borrell said after that meeting, adding that a final decision needed to be made formally.

The "risks of a nuclear incident will remain dangerously high as long as Russia is present on the site of the nuclear plant," they said in a joint statement calling for Moscow's withdrawal.