Our Roads Our Graves 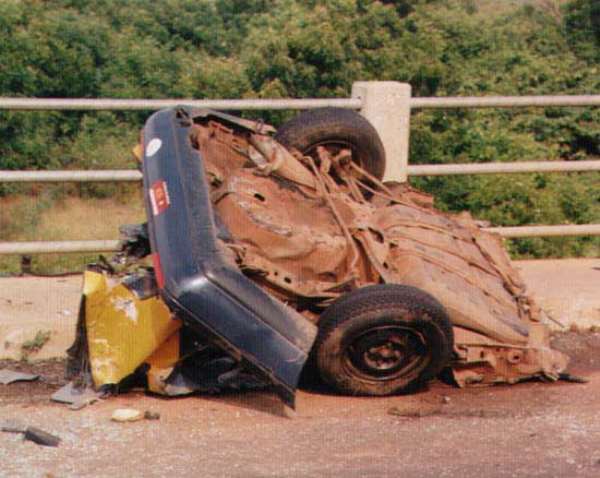 Today, road accident is a dominating issue in all over the places, crowding the pages of the press and the daily conversation of Ghanaians. It appears no single day goes off without you and I hearing about road accidents. I just returned from Lome and on the Ghana portion of the journey, road accidents have littered all the places. Our roads have become our graves; our roads our graves.

Just last two weeks, the country lost three of its doctors through a lorry accident on the Kumasi-Accra road. Less than forty eight hours and on the Kumasi-Obuasi road, fifteen passengers lost their lives. On the same road some four weeks ago, an articulated truck crushed a 207 Mercedex Benz, killing 20 people instantly. Then the re-nominated candidate for the Dangme East District Executive post, Mr Kabutey Caesar, died in a motor accident last Sunday evening, August 28, when he was traveling with his wife and son from Accra to Ada. The other day it got to the turn of Suzzy Williams. Never send to know whom the bell tolls for.

When the president visited survivors of the accident that killed the three urologists, he said “this is a national tragedy.” The president fell short of talking about the accident that killed 20 Deeper Life Church members, nor did he talk about the death of the galamsey miners, which is also a tragedy to the nation. The issue here is not what the president said or what he did not say. The issue is what is killing us on our roads? Do we have to adopt a fatalistic philosophy, stipulating that whatever happens in life is predetermined and that all events are determined by necessity? Or do we have to accept this as a cynical notion that death is inevitable and that one way by which one can depart from this world to the other is through lorry accident? Certainly not! Accidents on our roads are not our fate; it is a human error.

Road accident is a serious national crisis because it is becoming very common and is robbing the nation of its valuable human resources. Some of the socio-economic impacts include disability, therefore a high dependency burden, and for some victims, the gravity of their disability could render them jobless. With men representing 67% of national casualty, it has serious implications. The casualty is made up of those killed and injured. The implications of this are increasing number of widows and female-headed households. The implications for children are the inability to complete their education or acquire skills for life, making them school dropouts, social destitutes and social delinquents.

In addition, long periods of hospitalisation worsen the plight of the poor. In situations where they are unable to pay for bills, they are detained, an experience which can affect them socially, psychologically and mentally. Economic impacts of road accidents cannot be glossed over. It is determined that road accidents cost developing countries, which includes Ghana between 1-2% of the GDP. Current estimates show that Ghana loses about US$300m every year through road accidents. The cost does not include pain, grief and suffering. Costs for road traffic accidents include direct costs, namely medical care, property damage and insurance administration and indirect costs include property damage, delays on the roadway, fuel consumption as a result of road accidents and resultant traffic jam, loss of earnings, lost household productivity and environment costs.

As many as 40% of the adult surgical beds in some urban teaching hospitals in developing countries are dented to the treatment of road accident victims. Medical facilities and resources that are to be used for sick patients are diverted for accident victims.

The time has come for us all to examine what is wrong with our roads, our cars and us the drivers and passengers. Without this, we will end up in answers that do not answer; explanations which do not explain and solutions which do not solve. STATISTICS The statistics on road accidents in the country is very ugly. According to Supt. Tandoh, from January 1, 1992, to December 31, 2001 (a period of ten years), a total of 104,420 accident cases were recorded, giving an annual average of 10, 442 cases. About 145,331 vehicles were involved in these accidents, 10, 106 people lost their lives and 80,022 persons were injured. Road accidents are a common place in this country to the extent that in 1995, Ghana ranked 2nd to Mexico in terms of road fatalities. In 1997, it ranked 2nd to Nigeria and has remained at this position to date. Ghana has the second fatality rate in West Africa as far as road accidents are concerned and compared to Europe, the first. Another statistics also says that over 10,000 vehicles are involved in accidents; over 10,000 people get injured through accidents; at least 6 people are killed in road accidents daily; 25% are below 16 years and 25 % are aged 25-35; speed is a contributory factor in 60 % of the cases; 70% of the accidents occur on straight and flat roads; 70% are males; 18% of the accidents occur between 6 and 8p.m; Saturday is the most accident prone day ; April is the most accident-prone month.

In Ghana, existing accident data revealed that pedestrian fatality constitutes 45% of the national fatality rate. Men constitute 67% of the national casualty rate while women constitute 23% per cent of the national casualty. The continental fatality rate is between 40-45%, which means that Ghana's pedestrian fatality is the same as that of the controversial average. Ghana experiences 72 deaths per 10,000 registered vehicles. Appiah Kusi Adomako is an educationist, freelance writer and the president of the Ghana Chapter of Leaders of Tomorrow Foundation. He can be contacted through: Leaders of Tomorrow Foundation, P.O. BOX. KS 13640. Kumasi. Tel 027-740-2467 Views expressed by the author(s) do not necessarily reflect those of GhanaHomePage.