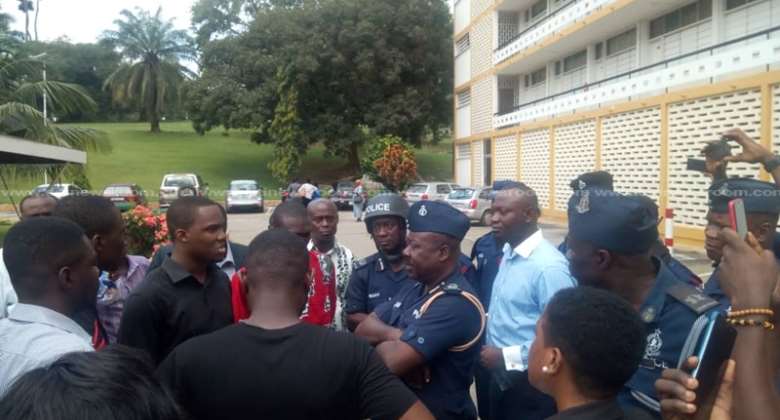 On a huge hill Cragged and steep Truth stands and he that will Reach her, about must, and about must go – John Donne – Satire III Motto of Commonwealth Hall - (Truth Stands)

“Quiet, you vandals”, vigorously ranted a student from one of the sedate halls to a boisterous group of students from Commonwealth Hall, the Third Hall built in 1956 (after Legon and Akuafo and the name “Commonwealth” was given the hall to signify Ghana's entry into the Commonwealth).

Its Coat of Arms was “Quarterly Or and Azure and Escarbuncle counter charged a Bordure Gules charged with three Mullets Sable fimbriated gold. And for the crest on a Wreath Or and Azure and Gules a Leopard passant proper behind the head of a Sun in Splendor Gold…”. The Commonwealthians adopted the “charge” and preferred it with a capital V to “Thirdians”, or “Patriots”. It is a complete love for the hall, and neighbors within the hall.

Every Vandal professes Vandalism in this same hoity – toity vein and displays a true sense of sincerity manifest in his belief in such a rhetoric” (See “Building a Sub-culture: A sociological probe into Vandalism” authored by our good selves for the Sociology Department of the University of Ghana in 1977. When the Mensah Sarbah Hall was built in 1963, some of the Vandals swarmed there, to enjoy single occupancy of the rooms (compared to the pairing in Commonwealth Hall to the extent that when Commonwealth Hall regarded the Halls as “colonies”, they granted Sarbah Hall, the “dominion” status. It was all fun, fun and more fun. Following tradition, the students resident in Sarbah Hall gave themselves the name “Vikings” and the bond grew so strong that some of the Vikings would retrace their way back home and enjoy. “Observatory Life”. There is a lot to learn from the veteran Vandal Historian – Theoretician, I.K. Gyasi.

We do not think any of these gentlemen would be enthused about the present acts of undisciplined riotous action involving the Vandals and the Vikings.

Of course, Kojo Yankah, President of the African University College, Adabraka, Accra would remember the day he led his group “to set aflame our own gowns in front of the Dining Hall while the Special Guests (including the British High Commissioner) were seated” (Read: “Our Motherland-My Life).

And John Dramani Mahama thought: “Commonwealth Hall had a controversial reputation… The boys at Commonwealth Hall were said to actually be unruly, rowdy, insulting and provocative. They paraded on campus virtually half-naked, and they kept a shrine in the hall to Bacchus, the Greek god of wine… I did not want to live there… the hundreds of people who had walked through the doors of that hall had uncovered the truth of their lives. I was determined to do the same…” (Read “My First Coup d'etat).

In August, 2002, the then Dean of Students of the University of Ghana. Dr. Vladimir Antwi Danso noted that: “…there was much evidence that the Commonwealth Hall was being used by a large number of students for occultism practices. Junior Common Room, the Hall Authorities and the Old Vandals Association protested vehemently, but the harm had been done, Ghanaian Times wrote an editorial: “Occultism For What?”. “The university authorities at Legon must have good grounds for being skeptical about the number of students on campus practising occult science, engaging in lesbianism and resorting to drugs… may the campus outreach programmes being conducted by some religious orders help to bring about a change of heart among undergraduates who have become a problem to themselves and the university at large.” Vladimir Antwi-Danso later tried to “explain that the point he sought to make was that lack of recreational facilities at the University had given rise to occultic practices …” Those who built Vandalism used “urine”, yes urine during the “libation” in front of the Bacchus shrine. “Punch” (an admixture of all types of drinks: beer, Guinness, whisky, wine, palm-wine, pito, malt, coke, Fanta used to be drunk in small tots). All these is to create fun, and most of the acts are done inside the hall, kept away fun the prying eyes of the non-Vandals, including the singing of bawdy songs, ponding and “charging” to collect food from the dining hall. Now, with the widespread use of the mobile phones that capture the most intricate secretive acts, the Vandals have to re-think their mode of behavior inside the hall.

There is no harm in seeking a dialogue with the university authorities. Students cannot take the law into their own hands. What happened to be fun does not seem to be fun any longer. The camaraderie can still be there, with the JCR Supreme Council of Vandals and Guys (SCVG), Choirmaster, Chief Vandal outfit in control.

We also hear of disturbances on KNUST campus, this time between University Hall (Katanga) and Unity Hall (Conti) Boys – and can you imagine the destruction ?12 students injured and 12 vehicles damaged!

We are proud that the Police acted promptly, else much more damage would have been caused. Campuses should not be turned into “war zone”, it is unthinkable that halls should be used as places where students would compete to show superiority of manpower, instead of brain-power. The concept “might is right” should be erased from the minds of all students.

What makes the news more disconcerting is the fact of 40 students coming from the University of Cape Coast to participate in the riotous acts. If it were a simple case of solidarising with the Kantangese in their celebration of their hall week, there would not be any pugnacity just like the CUVA, among students of Commonwealth Hall (Legon), Unity Hall (KNUST), Atlantic Hall (Cape Coast) but to go on rampage on a university campus is disdainful, to say the least. John Baptist says on Facebook: “the hall did not authorise any vandalism and would not bear any responsibility”. The individuals acted on their own (free) will” And what is happening at the Appiah Menka University? Or perhaps the students also want to be counted!

The Minister of Education, Honorable Yaw Adutwum, is naturally concerned: “I want to appeal to the students to understand that they are the future leaders and that they should use the right processes to create a peaceful, harmonious school environment so that the brand of the University of Ghana is not impaired.”

Let us try to save ourselves before asking God to save us.