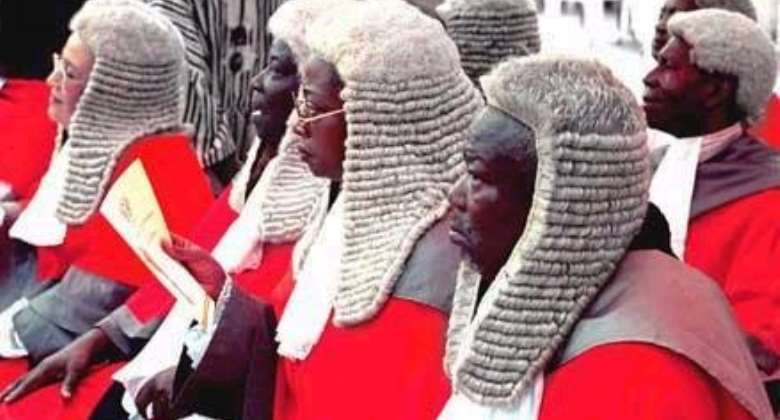 The August 2, 2005 news item on the Ghanaweb, captioned “Judiciary Must be Objective” also shows the picture of Ghanaian judges posing with president Kufour. The picture reminds me of two critical questions a Caribbean friend of mine asked me about 12 years ago during my undergraduate studies at York University, Toronto.

One day, this friend of mine came to lectures with a newspaper showing the picture of three Zambian judges wearing horsehair wigs, white gloves, garish robes, and fancy neckerchiefs. Pointing at the picture, he asked the following questions: Do these African judges have to wear these wigs and robes in order to perform duties effectively? Why is it that when the British migrated to settle in North America they discarded the culture of allowing their judges to wear wigs? Certainly, Ghanaian judges and those in other former British colonies need not wear wigs and robes in order to perform. In fact, the robes, horsehair wigs, and the other paraphernalia make our judges look ridiculous and aliens to our people. As well, they are uncomfortable, cumbersome, and unsuited to the scorching African sun. Also, this judicial costume is imported from Britain and very expensive. One horsehair wig costs about £1000 or US$2000, draining the little foreign currency that we badly need for essential imports. Finally, there is no need for Ghana or any former British colonies in Africa to share in a judicial culture which they were not part of historically.

Even the British who introduced this judicial costume to their colonies in African are seriously thinking about doing away with it. The Lord Chancellor's consultation paper reads that: “There is no justification for retaining working court dress on the grounds of tradition alone… our courts are not a tourist attraction.” I would not be surprised to see the British change that tradition while we hold on tenaciously to it. That is the way things have been in the former British colonies in Africa: progressive change is hardly initiated or encouraged. And our constant refrain has always been this: change is impossible in the former colonies because people have different attitude. Yes, people have different attitude but attitude is not fixed; it is fluid and constantly changing. The problem with change in the former colonies is that policy-makers, bureaucrats, and politicians regard change as a technical issue, not a sociological issue. Change as a sociological issue requires absolute commitment, honesty, perseverance, and modeling from the top-echelon of society. As an illustration, if the leaders of a society by their behaviour sabotage the very change they have introduced nothing changes.

However, why do Ghanaians and other former British colonies continue to maintain that colonial heritage? The answer, in general, lies in our inability to restructure our colonial institutions to reflect our culture and needs. The fact is that 48 years of independence is a reasonable length of time for us to restructure our colonial institutions in order to give us a true sense of nationhood and to signal to our contemporary youth that Ghana or Africa is capable of building a distinctive society. I am very optimistic that we have the capacity to design a judicial costume based on Ghanaian or African aesthetics. What we need at the moment is a transformative leadership at both the national and local levels to lead the cultural revolution in Ghana.

In graduate school I made friends with a professor, who was also a prominent judge. I asked this professor why Canadian judges do not wear horsehair wigs, white groves, and long robes. His response was that Canada can not borrow everything from Britain, despite its British heritage and that Canadians have to construct a society based on their own aesthetics rather than copy blindly from the Brits. How about Ghana or other African countries that have no cultural ties with Britain save through colonization? Commonsense suggests that we have a strong justification to cast away that cultural heritage compared to Canada, the US, Australia New Zealand. Consequently, the wearing of horsehair wigs, white gloves and long robes by our judges are a needless colonial heritage to maintain. And abandoning it does not mean that we hate our colonial masters. On the contrary, it suggests that we are innovative in that we retain only the eclectic elements of our colonial culture. Admittedly, some elements of our colonial heritage are good, but others are not. The wearing of horsehair wigs and long robes are an example of the bad elements that must be scraped. Even those good elements need continuous improvement. Y. Fredua-Kwarteng Ontario Institute for Studies in education, Toronto, Canada. Views expressed by the author(s) do not necessarily reflect those of GhanaHomePage.