By Ezinne Ezepue - The Conversation 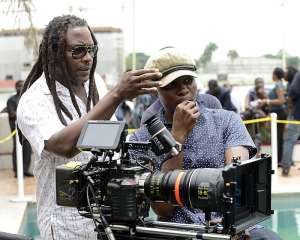 The writer, film-maker and theatre creator Biyi Bandele has passed away at the age of 54, news that has stunned the West African arts community where he was a creative icon who told classic Nigerian stories, sometimes in the Yoruba language, to a global audience.

He was the creator of modern Nigerian classics – co-directing the popular Netflix TV series Blood Sisters and writing the coming-of-age war novel Burma Boy . He was as well known for adapting Nigerian literary classics – a film version of Chimamanda Ngozi Adichie 's war epic Half of a Yellow Sun and a stage version of Chinua Achebe 's Things Fall Apart. He had just completed Elesin Oba: The King's Horseman , a film based on the famous play by Wole Soyinka .

A true born creative, Biyi was a serial storyteller and Renaissance man, who explored a variety of creative avenues in order to share his vision and voice. He started young , winning his first literary award at just 14 .

For the next four decades he worked tirelessly and with enthusiasm, becoming one of the most visible and exceptional storytellers of his generation. He understood how to work across the media, making Nigerian stories relevant and in the process elevating Nigerian culture, playing it out in global popular culture.

Raised in the north of Nigeria, schooled in the south and resident in the UK, Biyi was an (inter)national Nigerian. Or an insider-outsider , as he would say. Despite his international renown, he shamed a good number of other Nigerian creatives with his willingness to mentor and eagerness in the service of culture. Half of a Yellow Sun film

He was a haven to many, always ready to offer support and assistance to just about anybody – young and established artists, industry hopefuls, scholars like myself.

In our last correspondence in May, Biyi noted he was occupied with writing a new book with a looming deadline. He had a reputation for being a dogged worker, tenacious and dedicated. His extremely busy film-making schedule was fully booked until December.

A true African thinker with a fierce spirit of independence and creativity, Biyi was driven by a love for culture and story.

A small indication of Biyi's impact as a writer – and the vacuum he leaves in the literary space – was a tribute published in the online literary mag Brittle Paper. In it 100 African writers celebrate his life and work. Might be nice to add: Adichie writes:

Biyi was prominent for his 2007 novel Burma Boy , a tale of African soldiers in the second world war fighting on the side of the British colonisers against Japan. Burma Boy was personal to Biyi , a novel he had always wanted to write. It reflected the stories of personal and shared experiences during the Burma campaign as told him by his father and his father's friends who fought in Burma. Jonathan Cape/Penguin Books

Although criticised for not holding together particularly well as a novel, Burma Boy achieves its purpose. It breaks ground in offering a lived African perspective of the conflict, contributing to the African history archive. Characteristic of prominent Nigerian tales, Biyi punctuates the seriousness of his story with African proverbs, anecdotes and idioms.

In this and his other published works – The Street (1999) and The Sympathetic Undertaker and other Dreams (1991) – Biyi dwells on everyday, real people and their lived experiences.

The TV, film and theatre

Newer generations will know Biyi for his TV work, but he first made his mark in film in 2013 by choosing an ambitious project – the multi-million US dollar budget Half of a Yellow Sun – for a directorial debut . He displayed exceptional talent and proved an ability to draw great performances from his cast.

Many challenges beset the film – delayed production and censorship dramas in Nigeria , mixed reviews from critics , piracy , and a low return on investment despite setting a box office record in Nigeria . Even so, Biyi had cemented his mastery of adaptations and historical rendition.

He had previously adapted Achebe's famous novel Things Fall Apart for the stage and published plays of his own. He directed a documentary on legendary Nigerian musician Fela Anikulapo Kuti .

Biyi created numerous popular dramas on TV. He directed the 2013 season of the popular MTV drama Shuga , which follows the real life challenges of young Africans.

His glossy 2015 film Fifty explores the many binaries faced by middle aged women everywhere, but especially in Lagos. Here he again highlights the multifaceted yet beautiful Nigerian megacity, the place where he was again working and where he would end up dying.

Working tirelessly from Lagos, he co-directed one of Nollywood 's most sensational miniseries, Blood Sisters (2022). According to my analysis it's a story which x-rays the anguish of gender inequality while extolling sisterhood and challenging taboos. Blood Sisters drew global audiences and within a week of its release it was on the top 10 most-watched shows on Netflix.

Biyi had lofty plans for the future – stories to write and films to create. He is deeply missed, especially with mounting anticipation for the Netflix and EbonyLife production Elesin Oba: The King's Horseman. Billed to premiere at the 2022 Toronto International Film Festival, it is scheduled for release in September and could yet be his finest adaptation.

Based on the play by the Nobel Prize-winning Soyinka it explores true historical events. For a continent and a Nigerian society becoming increasingly spread across the diaspora, there is a continual yearning for a (re)connection to roots and heritage, Elesin Oba will be an attraction. For students who find the play hard to read, and I was once in this category, Biyi's version will provide a pleasurable alternative. He will help keep alive and relevant the great works he adapted.

Read more: Blood Sisters: why the mini-series on Netflix sets a new pace for Nollywood

Biyi mentioned other works in the making. He was going to adapt Burma Boy into a film. He reportedly spoke of a new book billed for publication in 2023.

We know that in Death and the King's Horseman, Elesin sacrifices himself for the safe and onward journey of the Oba(King). What we do not know is why Biyi left just before the unveiling of this monumental recreation. He will be remembered as a tremendously talented writer and filmmaker, a hard worker, mentor and mensch. His creative works now outlive him, engraving his name in the sands of time.