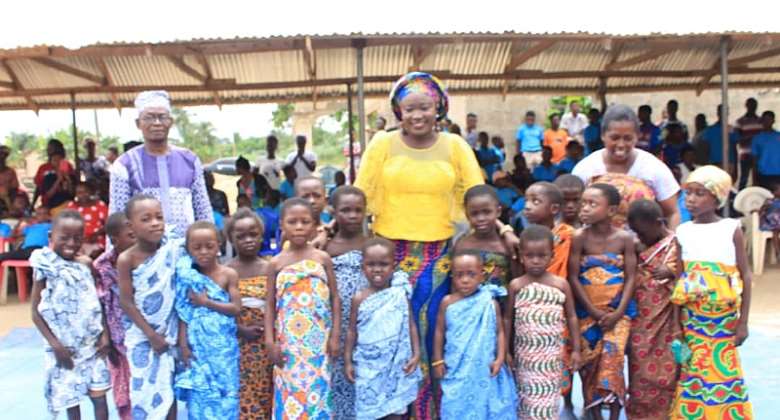 The President of an Obuasi based Non-Governmental Organisation, Mama Love Foundation, Rev. Dr. Love Konadu has expressed her disgust at the way school children at Wrowroso, a farming community in the Amansie Central District of the Ashanti Region had gotten themselves involved in galamsey activities at the expense of their education.

She said it was a worrying situation to have children risk their lives and education in their quest to get money from illegal mining activities. She cautioned parents that, her NGO has partnered with the school authorities to arrest parents whose children engage in illegal mining.

Rev Dr. Love Konadu was speaking at a fundraising event held by teachers and the community at Wrowroso to raise funds to support the kindergarten section of the Wrowroso D/A Basic school.

School children skipping school to work at galamsey sites has become a common sight at mining communities in the country. A phenomenon which the Wrowroso community has struggled to deal with.

The President of the NGO which has over the years supported the vulnerable and less privileged in the society said the responsibility lies with parents to ensure that their children are always in school. She said " I plead with parents here to prioritize the education of their children. We can't allow our children to risk their lives and future by going to galamsey sites ".

She pledged to support the school through her NGO by visiting the school regularly and making sure the children are always in school.

Again, she mentioned that, she is in the process of procuring teaching and learning materials for the kindergarten and encouraged all stakeholders to assist the school.

Together with Raymond Kabutey Kanor, a Businessman, Rev. Dr Konadu presented assorted drinks, pens and erasers to the school to boost their morale.

The Headmaster of the Wrowroso DA School Prince Aboagye in an interview with the media explained that Hither to, the school children used to travel several kilometres to nearby villages like Fenaso and Adinkra to assess Junior High School education since the only school in the community was up to class 6.

He said, this affected the children who felt tired and exhausted after making that long journey to school hence could not frequently avail themselves in school.

It took the ingenuity of the Headmaster of the school who fought tooth and nail to look for a makeshift structure to house pupils who had graduated from class six to prevent them going through the ordeal of travelling to the nearby communities to attend school.

The Headmaster, Aboagye Prince said he started the Junior High school with 16 students with the first batch completing in 2020 with aggregate 14 as the highest mark and aggregate 22 being the lowest mark attained that year.

Subsequently, he said, the performance has been improving.

The Headmaster also revealed that, one of the ways the community has devised to keep the school children in school is to build a 3- unit JHS block . He said the community initiated the project but at a point needed the intervention of an Obuasi based businessman popularly known as Agya Asamoah and Mama Love Foundation to continue. He was optimistic the project when completed will lessen the burden of pupils studying in the makeshift facilty provided by the school.

Kennedy Agyapong will win NPP’s primaries because of his hon...
19 minutes ago

You disgraced yourselves and the entire country by booing Ak...
26 minutes ago