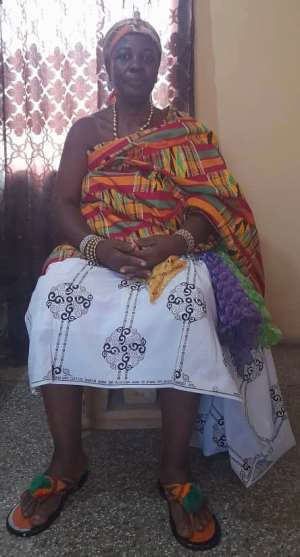 The issues surrounding Asotwi chieftaincy has taken a new twist as the Krontihene of Asotwi without consultation with the queenmother has allegedly installed a new chief yesterday, August 8th, 2022.

The new chief according to the queen mother is not recognized by the royal Asona family of Asotwi traditional council.

Nana Adwoa Brayie I, queenmother of Asotwi in an interview with this reporter disclose that it’s her traditional mandate to elect and present a rightful candidate to the Omanhene of Ejisu, Nana Afranie Okesse for approval before a chief can be installed.

According to her, all her attempts to officially introduce the elected candidate proved futile, explaining that the Omanhene of Ejisu, Nana Afranie Okesse allegedly refused her candidate for reason that the said candidate presented by the queen mother took him to court on land litigation.

But the queenmother refuted the allegation by the Ejisu Manhene indicating that the said candidate has no involvement in the land issues that went to court.

She therefore revealed that she invoked the oath of his royal majesty, Otumfour Osei Tutu II to resist any attempt by anyone who tries to install a chief without her consent. Yet the Omanhene of Ejisu override the invocation and directed the Krontihene of Asotwi to allegedly install a new chief, something she has called on the Ashanti King to look into.

The royal family of Asotwi and heir apparent to the throne is calling on His royal majesty to as a matter of urgency look into the issue and settle issues amicably.

The Asotwi throne has been left vacant for the past four years after Nana Oteng Sarfo dethroned himself.

The issue of who ascends to the throne became a matter after five royals availed themselves for the position.

The queenmother revealed that after careful deliberation and in consultation with relevant stakeholders, she together with the Abusuapanin, Opanin Yaw Nkansah made a choice but was rejected thrice by the Ejisu Manhene.

The royal Asona family has announced that they do not regard the installed chief until Otumfour settles the issue.

Our SinoHydro road projects has silence NDC, when we talk th...
5 minutes ago

Let's go on our knees and pray for Akufo-Addo for God's inte...
32 minutes ago