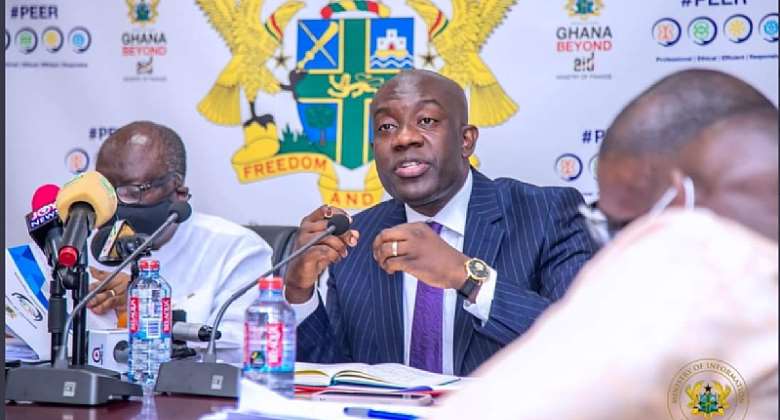 Information Minister Kojo Oppong Nkrumah has said government cannot admit that it has mismanaged the economy because that is not true.

He said available data between 2017 and 2019 clearly indicate that the economy was doing well.

Asked why it is difficult for managers of the economy to admit that there has been some level of mismanagement, while speaking at the 3businesscolloquium organised by Media General in Accra on Wednesday July 6, he answered “Because you don’t admit something is not true, you will have to look at the hard data. You seek to put a narrative on it but it doesn’t take the fact. Take the Ghanaian economy from 2017 a to 2019 and see . The Ghanaian economy has had its structural challenges in the broader economy, challenges in the fiscal framework. There are even questions as to how monetary policy answers the question of inflation.”

In an earlier interview with TV3, Mr Oppong Nkrumah said the conditions that have compelled the Akufo-Addo administration to go to the International Monetary Fund (IMF) for support are completely different from the situation that existed previously when Ghana went to the Fund in 2014/15.

He explained that it is not about domestic economic management rather, it is about international crisis-induced phenomena that have brought over one hundred countries including Ghana, to a point where their buffers have been eroded and they need to respond.

When asked for his views on claims that critics are taunting the government for running to the Bretton Woods institution due to how the New Patriotic Party (NPP) also behaved when in opposition at the time the John Mahama administration went to the IMF for support, Mr Oppong Nkrumah who is also lawmaker for Ofoase Ayirebi told TV3's Paa Kwesi Asare Asare in an interview that “When you self-induced crisis and then you have to go to the Fund for a balance of payment support programme, then it raises questions about the way you are managing fiscal policy, monetary policy and the broader economy.

“But this is not a situation in which you have a self-induced crisis. This is a different scenario altogether. It is not about your domestic economic management, it is about an international crisis-induced phenomena that has now brought you to a point where your buffers have been eroded and you need to respond.

“That is why for example, from 2020, about half of the world's countries are applying to the Fund for some support. It is not to say that all of the people who manage all of these over one hundred economies do not know how to go about their jobs but is it evidence of the fact that something external, something exogenous has hit, that is why today, Egypt, Kenya, I understand Tunisia is also applying for some sort of support, are asking for support.”

Asked again whether the government has been embarrassed by this decision, he answered that “The reasons that have brought us here are quite clear.

“The results were that we were doing better , inflation rate was going down , interest rates were going down , we were having the opportunity to create some more jobs and some more development programmes in the economy. In 2020 ,that stopped, primarily because our economy still with its challenges, was hit by major external factor, not just our economy, many economies around the world. In 2021, we started a path to recovery, so you will notice that in 2021 even though we had depleted a good chunk of our buffers and our reserves, we were still now building back better, trying to rebuild our reserves and trying to get our economy back on track.

“Then, the first part of 2022, I think in February, you had what occurred in the Black Sea area, giving the world another major crisis. Now there is high food prices all over the world, high fuel prices, high cost of financing and it is biting Ghanaians a lot.

“Do you have the domestic buffers still to respond to them? You don't. You are now just trying to recover and rebuild and so if you look at all your options, despite the initial thinking that you could rebuild those buffers domestically, the president has decided that it is important we start engaging with the Fund for the possibility of getting a balance of payment support from them. To help us rebuild our buffers and better mitigate what is happening around the world and happening here in Ghana as well.”

On Friday July 1 President Akufo-Addo gave instruction to Mr Ofori-Atta to commence the engagements with the IMF following a telephone conversation between the President and the IMF Managing Director, Miss Kristalina Georgieva, conveying Ghana's decision to engage with the Fund.

The Ministry of Information announced this in a statement.