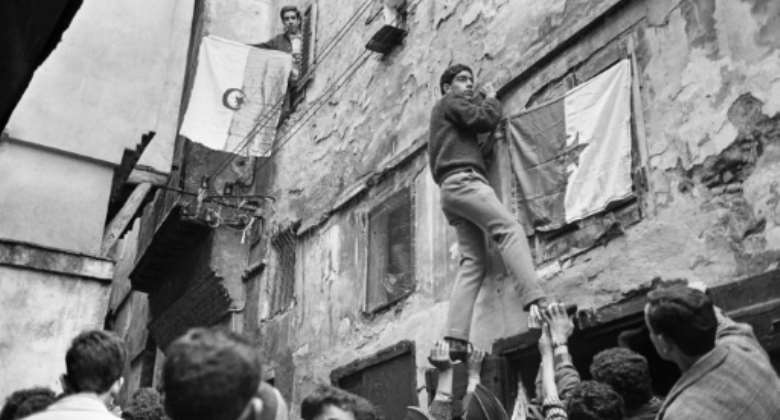 Young Algerians hang their country's national flag on buildings in the capital on July 6, 1962, a day after the North African country won its independence from France following an eight-year war. By - (AFP/File)

Algeria marks 60 years of independence from France on Tuesday, but rival narratives over atrocities committed during more than a century of colonial rule still trigger bitter diplomatic tensions.

The North African country won its independence following a gruelling eight-year war which ended with the signing in March 1962 of the Evian Accords.

On July 5 of the same year, days after 99.72 percent voted for independence in a referendum, Algeria finally broke free from colonial rule -- but memories of the 132-year occupation continue to mar its ties with France.

The country's authorities are planning to mark the anniversary with pomp and ceremony, capped by a vast military parade in Algiers, the first of its kind in 33 years.

A show is also planned at the capital's opera house that "retraces the long history of Algeria", said the minister for independence fighters, Laid Rebiga.

The government has even commissioned a logo -- a circle of 60 stars containing military figures and equipment -- to mark "a glorious history and a new era".

Algeria's war of independence left hundreds of thousands of dead and, despite a string of gestures by French President Emmanuel Macron, a crisis late last year underlined how spiky the issue remains six decades on.

Macron reportedly questioned whether Algeria had existed as a nation before the French invasion and accused its "political-military system" of rewriting history and fomenting "hatred towards France".

Algeria withdrew its ambassador in response.

"Relations between the power system in Algeria and 'official France' have been punctuated by crises and pseudo-reconciliations since independence," said Athmane Mazouz, head of Algeria's secularist opposition party RCD.

"At this point, all bets are off on whether they can establish better ties."

'Take heat out of debate'

France has ruled out any form of apology for the colonial period. But Macron has also made a number of gestures aimed at mending ties with the former colony.

In this file picture taken on May 15, 1962, a French soldier looks at a store destroyed by a Molotov cocktail in Algiers. By - (AFP/File)

Visiting Algiers during his first presidential campaign in February 2017, he described colonisation as a "crime against humanity".

He has since acknowledged the French army was behind the death of Algerian nationalist lawyer Ali Boumendjel and anti-colonialist French mathematician Maurice Audin.

France has returned the skulls of 19th century Algerian resistance fighters and opened state archives on the Algerian war.

And the two sides appear to have moved on from the latest crisis. Macron and his Algerian counterpart Abdelmadjid Tebboune confirmed in a June 18 phone call their desire to "deepen" relations.

Tebboune even congratulated Macron on his "brilliant" re-election and invited him to visit Algeria.

Historian Amar Mohand-Amer said it was time for "a quick return to a normal situation".

"Sixty years after independence, isn't it time we took the heat out of this debate?"

Mohand-Amer pointed out that the anniversary celebrations come at a time of raised tensions in the wider region around Algeria.

In this file photo taken on July 2, 1962, young Algerians celebrate in Algiers a day after the self-determination referendum. By - (AFP/File)

In early June, Algiers suspended a two-decade-old cooperation pact with Madrid after Spain backed Morocco's stance in the long-running dispute over Western Sahara.

To the east, in war-scarred Libya, the emergence of two rival governments has raised fears of a return to armed conflict after a two-year truce.

And to the south, Mali is in crisis after army officers, disgruntled at the government's failure to roll back a jihadist uprising, ousted president Ibrahim Boubacar Keita in 2020.

"The very unstable regional geopolitics demand strong positions in the mid to long term and the consolidation of political and economic relations" between Algeria and France, Mohand-Amer said.

But the historian fears that Macron's move towards reconciliation could face a major test due to gains by extreme right leader Marine Le Pen's party the Rassemblement National in June elections.

Le Pen said in March that colonialism had "contributed to Algeria's development" and accused Macron of "spending his life apologising without asking anything in return from an Algerian government that continues to insult France".

Mohand-Amer warned that "the French far right will transform this mandate into a big battlefield of memories, where revisionism and the falsification of history will be omnipresent."

We voted massively for Akufo-Addo but gov’t has denied us de...
57 minutes ago