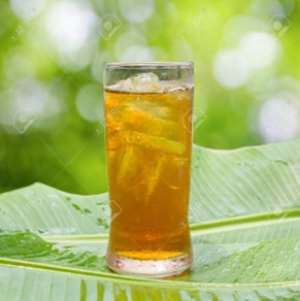 In the olden days at Suhum-Amrahia, I used to see my grandparents wrapping food, especially Banku, in Plantain leaves. Additionally, on the farm, we had no bowls; as such, we had no option but to eat on the plantain leaves. At the time, however, nothing prompted me to ask if there was any science attached to this tradition of eating on plantain or banana leaves. Sometimes, the leaves were also used in steaming foods. I didn’t know that eating on fresh plantain leaves was both therapeutic and eco-friendly. I also did not know that plantain or banana leaf bath is the best natural medicine available, as it can take care of skin disorders and other health problems. The plantain leaf (Plantago major) is a green, weedy plant native to North America, Europe, and Asia. Cultures around the world have used the plantain leaf to help relieve health ailments for millennia.

Margaret L. Ahlborn (ND) asserts that the plant is one of nine sacred herbs mentioned in the ancient Lacnunga ('Remedies'), a collection of Anglo-Saxon medical texts. During the 1500s and 1600s, it was used by Europeans for everything from dog bites and boils to fevers and the flu.

The major components of plantain are iridoid glycosides (particularly aucubin), mucilage, and tannins. Blument, (1998) agrees that they are believed to reduce irritation, quell harmful organisms, and exhibit expectorant actions.

Clinical Studies of the Plantain Leaf

Modern science is just beginning to study the effects of plantain leaves, and studies are confirming some of these traditional uses. A recent retrospective study by Dharmashamvardhini, (2020) which involved 40 insomnia subjects examining the effectiveness and therapeutic effects of the plantain leaf bath showed significant improvement in blood pressure. The post-intervention data showed significant improvement in cardiovascular health. The author concluded that the incorporation of Naturopathy mediated therapy involving plantain leaf bath significantly improved cardiovascular and sleep quality.

According to Wegener and Kraft, (1999), the German Commission, which is similar to the United States’ FDA but regulates herbs and their medical use, approved the internal use of plantain leaves to ease coughs and irritation of the mucous membrane which are associated with upper respiratory tract infections. They found that experimental research confirmed its beneficial properties, which can help reduce the irritation of lung tissues that cause discomfort. It can also help to stimulate the immune system. They recommend the plantain plant for moderate chronic irritative cough, especially for children.

Two previous clinical trials by Kiochev, (2012) in Bulgaria documented the plantain plants’ efficacy for chronic bronchitis. It acts as a demulcent, such as pectin and glycerin, which are common ingredients in cough syrups and throat drops. Demulcents relieve minor discomfort and irritation by forming a soothing film over the affected mucous membrane. This property can also make the plantain leaf an effective relief for coughs caused by the flu, cold, and irritation. Since demulcents can cause more mucus production in the lungs, they are more often used to relieve dry coughs.

Another study by Chiang et al., (2003) in Taiwan, where plantain leaves are used in folk medicine for various infectious ailments related to the respiratory, urinary, and digestive tracts, found that hot water extracts from the plant showed resistance to harmful organisms. They also confirmed the immunostimulatory effects found by Commission E.

A previous study by Zanon et al., (1999) in the Department of Microbiology and Immunology at the Universidad Nacional Río Cuarto in Argentina also confirmed plantain leaf's resistance to harmful organisms when studying alcoholic extracts from 8 different plants.

Another study conducted by Holetz et al., (2002) in a Brazilian university found that three plants from the Asteraceae family, including the Plantago major, had some degree of activity against harmful organisms, including yeast. They believe this explains its use for many infectious ailments in Brazilian folk medicine.

Apart from the plantain leaf, studies have also indicated the benefits of banana leaves. A recent study by Fathima-Jebin et al., (2021) found that 30 min of Banana Leaf Bath might be effective in reducing heart rate and in improving heart rate variability towards vagal dominance in healthy individuals.

Andrade-Cetto, (2008) also notes that people in Colombia use plantain leaf to promote good health. The gastrointestinal category dominates its use in Mexico. These are just a few of many examples of how plantain is used across the globe. Due to its long history of use across the globe, and recent confirmation of some of its therapeutic properties, plantain leaf is now used primarily as an herbal remedy for upper respiratory tract health.

Plantain leaf also aids in facilitating the movement of green rays present in the sun, directly into the body. These rays are found to serve as a good antiseptic agent and have excellent healing properties. This process is regarded as one of the detoxification processes which involves profuse sweating. The treatment involves covering the affected with plantain leaves or banana leaves. These banana leaves convert the harmful ultraviolet sun rays into healthy rays. It could be due to the presence of polyphenol, Epigallocatechin Gallate (EGCG – a very beneficial ingredient in the skin rejuvenation treatment) in its leaf.

The writer is a Professor of Naturopathic Healthcare and the President of Nyarkotey College of Holistic Medicine & Technology (NUCHMT) and the African Naturopathic Foundation. E-mail: [email protected].