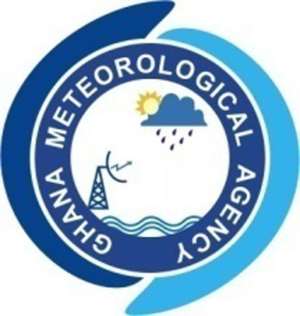 On Friday, June 10, 2022, it stated in its 06:00 GMT reports that the storm will take effect from 07:00 GMT in the stated regions and particularly in coastal communities such as Accra, Axim, Aflao, Ho, and Saltpond.

These extreme weather conditions are expected to hit coastal communities between 7:00 and 10:00 GMT, with the storm for the northern sector hitting between 10:00 and 13:00 GMT.

The storm, which was observed over northern Ghana, is also expected to produce thunderstorms and rain, according to the Agency's forecast.

“A moderate to heavy rainstorm observed Time Issued over the eastern gulf is expected to propagate to the west and produce rain, thunder, and windy conditions over areas in the coastal sector. A separate Rainstorm observed over Northern Ghana will produce thunderstorms and rain within the validity period,” a summary of the report by GMet.

It also issued a similar post on its Facebook wall indicating that this morning and into the afternoon, a rainstorm is expected to cast clouds with scattered to widespread thunderstorms along the coast and portions of the middle sector. The rainstorm will be accompanied by moderate to strong winds.

“A rainstorm is expected to cast cloudiness with scattered to widespread thunderstorms ⛈ ⛈along the coast and portions of the middle sector this morning into the afternoon. Moderate to strong winds 💨 will accompany the rainstorm. Stay Safe for more updates,” it added.