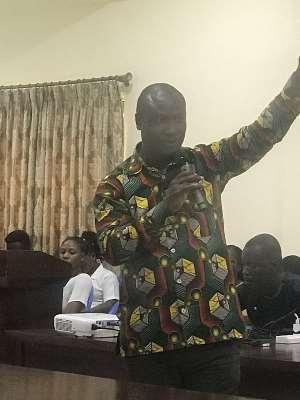 Engineer Solomon Noi, the head of the waste management department of the Accra Metropolitan Assembly, believes that government should invest more in sanitation infrastructure to help achieve proper waste management in the country.

Ing. Noi made this suggestion while facilitating training on the theme "Zero Waste Accra" for environmental health officers drawn from various municipalities in the Greater Accra region on Wednesday, June 8 at La Dade Kotopon Municipal Assembly.

According to him, the reason why Ghana has not been able to achieve a higher mark in terms of waste management is the fact that various governments in the history of our country have not been investing well in terms of providing infrastructure.

He noted that donor agencies are the only ones helping achieve the desired goal of good sanitation that comes with managing waste properly.

"The funniest thing is that no government in the history of Ghana has been able to invest in building facilities that will help increase the proper management of waste as a country but rather build infrastructures for sporting and entertainment events such as stadia and national theatre as well as conference centres,” he intimated.

He added that investing in sanitation infrastructure is the reason countries like Japan and others have been able to eradicate issues of improper waste management that result in flooding even though they are situated in the middle of an ocean.

Speaking to ModernGhana News after the program, Ing. Noi suggested that government of Ghana should build at least one sanitation infrastructure in each region of the country to help eradicate the poor sanitary menace in the country.

“Apart from the donor agencies At least one infrastructure in every region will serve as a lot of goods and that will mean less amount will be demanded from the clients who are the generators of the will,” he opined.