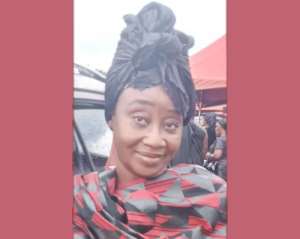 Absolute Shame on President Akufo Addo for 'commanding ' the EI - 144 Achimota Forest declassification. It is a Security and Existential Threat. It is also a disdain of the country he pretends to lead, but, has abandoned to parochial "mafia" interests, for permissive corruption and apparent criminal misgovernance. This is exemplified in the NPP Bigwig "Sir John", Kwadwo Owusu Afriyie's purported 'Will' which is said to be being contested, SO WHAT?

Ghana's entire 4th Republic has been seemingly led by a demonic black star of Corruption headquartered at the seat of government, with Ghana as a pitiful playground for political and crony haulage, without repercussion. Currently, a nonchalant Jubilee house, perceived as a corrupt powerhouse, with trickle-down pollution on the populace; conceding 361.50 acreages of pristine Achimota Reserve Forest, upscaled from initial 90 "gifted" acres, through varied NPP/ NDC power ploys and devious Forestry Commission conniving and fishy errors, as justification for the so-called "Periphery" disposal as though that assuages the conscience, is causing national uproar.

The baffling claim by the "See no evil " Samuel Abu Jinapor, that the forest's total accurate acreage since 1927 was not even known until 21st February 2022, almost a century later at the doorstep of the Attorney General for the infamous declassification that reduced the prime forest to a minimum, with an estimated 70% gone is certainly UNBELIEVABLE.

paramount largess to a single family to the detriment of overriding national interests?

Let us indulge reasonable cynicism. How much of the ever-increasing Achimota forest giveaways from successive governmental magnanimity, was to return as kickbacks to underwrite declassification for the benefit of the Owoos?

If the supposed "incompetent and corrupt" President John Mahama's proposed Eco-park and 118 acres which ballooned to 198 incredulous acres ceded to the Owoo's has been supplanted as inconsistent with sound ECOLOGICAL development, how come a repackaged give-away of 361.50 declassified acres plus a Ghana Hyde-Park is now the most awesome? ILLOGICAL way forward? Are we not looking at magnified incompetence greed and mega corruption from frying pan to fire?

Let us urgently urge our "Purse -Preserving" President Akufo Addo, whose Finance Minister Ken Ofori Attah wears a heavy-weight title for borrowing and does 'lalasula" begging for The National Cathedral as part of budget presentation but could not set up an Achimota Forest Conservation fund with local support, to please shut down the Minerals Commission that wily nilly gives permits for mining reserve forests and the Forestry Commission that has no iota of public conscience or global policy direction for investigation and prosecution of the key Executives, Directors and culpable workers who indulge spiralling free- for -all corruption which is evident on the face of the embarrassing contents of files used to underwrite the declassification.

If a "short-sighted" Samuel Abu Jinapor, failed to see through the cock and bull corruption laden increases in acreage at every change of political actor including himself, the red flags and the tall tell-tale errors everywhere, intentional misallocations, fake excuses, unforgivable incompetence with technical expertise, which he presented to support the misleader declassification, does he have capacity to redress the inordinate harm done through the Forestry Commission misadventures? Is he qualified to deliver on Operation Halt- galamsey, with such a pathetic inability to perceive impropriety? Should the Forestry Minister not be fired for 'misleading' the President albeit with his consent?

The Fundamental Premise: Is the Owoo family owed any compensation at all and what is the appraised monetary and legal value? Why have successive governments acquiesced to return a prime reserve forest when the contemporary national interest and need for its preservation are direr than originally contemplated? Why have open avenues of international collaboration such as the UN, and global conservation funds not been considered?

But, there is equally no record of an Owoo family debt in colonial handover notes or is there? Is a Certificate of Title then, not evidence of presumed payment?

Furthermore, if there were a valid claim, how come the Owoo family since 1927 did not petition the Colonial Admin that made the acquisition up to 1957, Nkrumah, Busia, Liman or Rawlings civilian or any of the Military Heads for redress until 2006, almost 80 years later, that they had not been compensated in a convenient forum of a "gentle giant" President Kufour with an ironic Zero tolerance for corruption slogan at Osu Castle that started this downward spiral. Would adverse possession not apply? Does historic legal precedent support any entitlement or this is a humanitarian gesture gone amok?

Why has Abu Jinapo nullified Sir John's acquisitions which would be VOID but for declassification which effectively ratified or sanitised same for valid registration but for the public outcry? And why did the forestry commission grant leases to and sanction Owoo family sub-leases for development prior to a fait accompli declassification and use same as an excuse for increased acreage? Is this justifiable environmental governance?

Let me dare ask, are they saying the NPP 'powerhouse' Sir John was hallucinating about ownership by proxy companies when he wrote his Achimota forest bequests? Is it not reasonable to opine this depicts insider deals with pre-knowledge of subsequent declassification? The PR damage control nullification gymnastic is certainly unconvincing.

1. Could Sir John have had the singular audacity to assign acres of Achimota forest to himself by Proxy without higher authority leveraged interests and assurance of retroactive legitimacy or ratification which the declassification represents?

2. Would declassification not have paved the way for Sir John's heirs and assigns and other undercover Proxy would be- owners undertake Valid registration but for the leakage of the Will and public outrage that has led to nullification of a supposed non-existent registration by Sir John?

3. Can President Akufo - Addo look us squarely in the eye and honestly tell us under his sworn oath of office, that he had no prior knowledge of any clandestine pillage of Achimota forest of which Sir John's pre-emptive acquisition would be minutiae of hidden proxy interests prior to the declassification?

4. Does Ghana have genuine institutional capacity to investigate any matter involving the Presidency and or public officials when across board, state institutions are headed by folks appointed by the president whose affiliations often go all the way to constituency, regional or national party headquarters??? Was not the late CEO of the Forestry Commission also the NPP General Secretary?? What hope do we have for a truly independent investigation when the executive has tentacles and long hands everywhere with ability to negate investigative independence that includes the office of the Special Prosecutor??? Se wonnim Owuo a hw3 Nna" ie take a cue from sleep as a death preview" What did President Akufo Addo do to the Amidu Agyapa report if not a foiled attempt to insert a nighttime negating 13- page Ken Ofori Attah override?

Please Mr. President let Ghana be spared the further expense of a cover-up investigative charade which will follow a classic pattern of syndicated attempts to whitewash dead tombs and pave a way for living gravy trains to continue as evidenced by the lands commission's initial dust throwing nonsensical pronouncement that there is no registration of Achimota forest in Sir Johns name. SO WHAT? What a 'kaakaaku" concert party comedy when the holdings are by proxy companies? If the corruption-ridden Lands Commission which also needs a major overhaul had been complicit in such a huge scandal would they tell us?

In any case, if there had been no registration yet, it was because the time was not " RIPE". Registering Achimota forest holdings prior to declassification would not only have been void, it would have blown the cover of an obvious undercover operation intended as secret holdings consistent with the classic operational module of corruption.

When all the chips are down, Mr President, Are you unaware of or happy about the dreaded climate change hassard staring us in the face?

Please restore Presidential integrity and give Ghana an uplift from "everything has become basaa", doldrums under your watch. Please reverse the onerous declassification of Achimota forest in the superior national interest of biodiversity, conservation / contemporary climate change imperatives.

We want to save our worthy Achimota forest. Common sense demands it. Posterity reinforces the demand. Thank you Mr President.