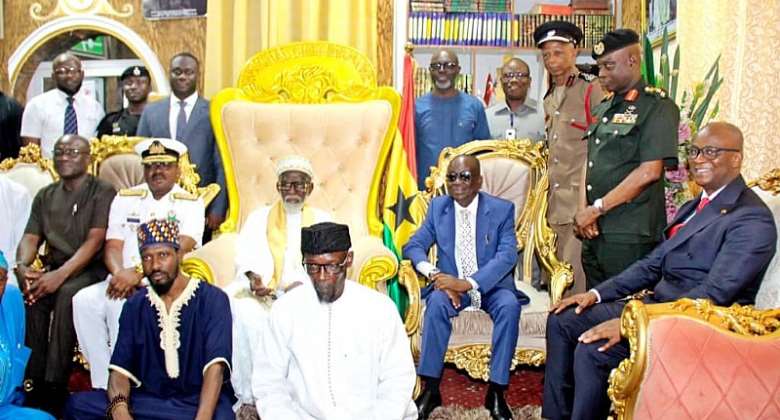 Hon. Albert Kan-Dapaah briefed Sheikh Osmanu on the “See Something, Say Something” campaign, which is a citizen awareness campaign aimed at creating awareness regarding the threat of terrorism and encouraging citizens to remain vigilant.

He also talked about citizens collaboration with State Security and Intelligence Agencies to reduce the threat of an attack in Ghana.

Hon. Kan-Dapaah expressed gratitude to the Chief Imam for his unwavering support for the activities of the Ministry over the years, and called on him to once again support the campaign by aiding with the sensitisation of Ghanaians and urging same to remain vigilant.

The Chief Imam, on his part, lauded the campaign and pledged his full support. He informed the Minister of his intention to disseminate the request to his Regional, Metropolitan, Municipal and District Imams for their congregants.

He also stressed that Ghanaians are one people regardless of the religion. He noted that without a peaceful environment, Ghanaians could not practice their respective religions, hence the need for co-existence.

Hottest Photo Reports
Catch up with all the political quotes from our politicians.
Advertise here
More from Headlines
ModernGhana Links
Our education is in crisis – Former UEW Vice-Chancellor
Going to the IMF is not a get-out-of-jail card; our suffering will continue – Joe Jackson
A president who can't reshuffle his ministers or sack absentee ones is not a leader —Manasseh slams Akufo-Addo
TOP STORIES